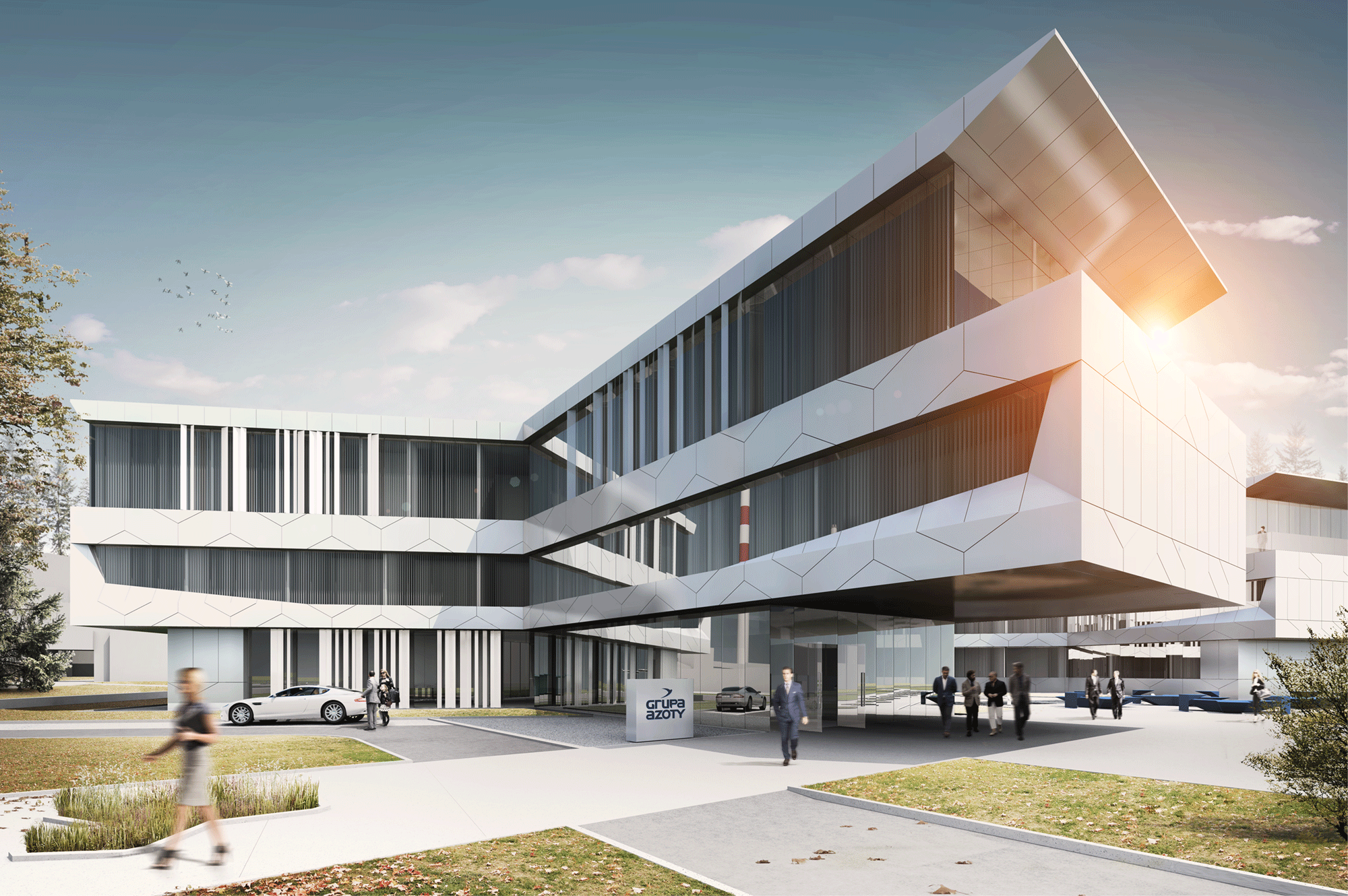 A new face of the Azoty Group’s industrial plant in Police. Comprehensive solution for factory foreground and organization of the communication system. Architecture of the building is inspired by the chemical formula of products manufactured by ZCH Police. 100% of heat and electricity for an office building, is being produced by generators powered by a waste steam from the plant. 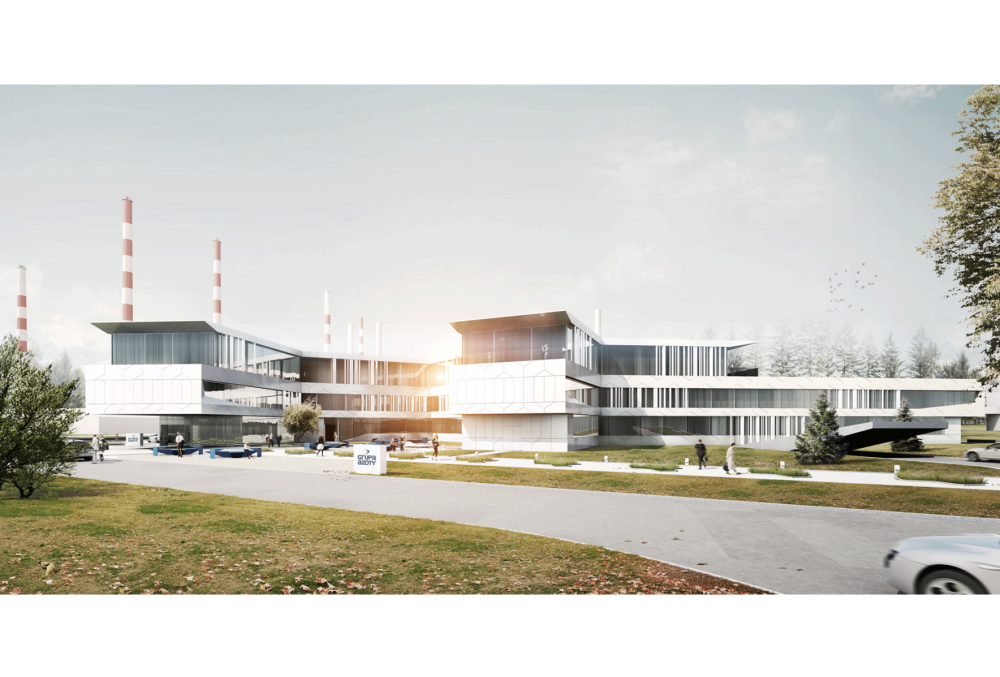 In accordance with Grupa Azoty's strategy, Chemical Plant in Police is expanding on foreign markets. They diversify their activities, through an ambitious investment project - Polimery Police (2019-2022), worth 1.27 billion euro. The plant which is producing titanium white, the basic component of paints and varnishes; AdBlue, a preparation used to reduce nitrogen oxides in diesel engines; multi-component mineral fertilizers and urea, needed a clear sign reflecting their aspirations. It was decided that the transformation of the foreground of the plant, will be the most optimal solution, also in terms of implementation costs. Integral element of the foreground is the administrative building, which was to replace the office building, built in the 1970s. 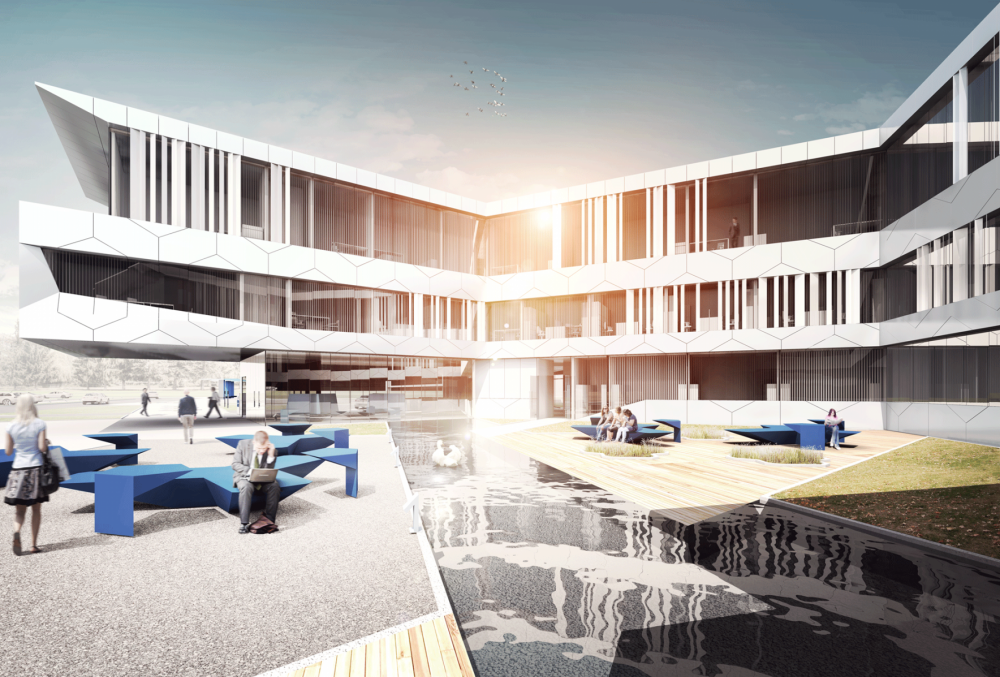 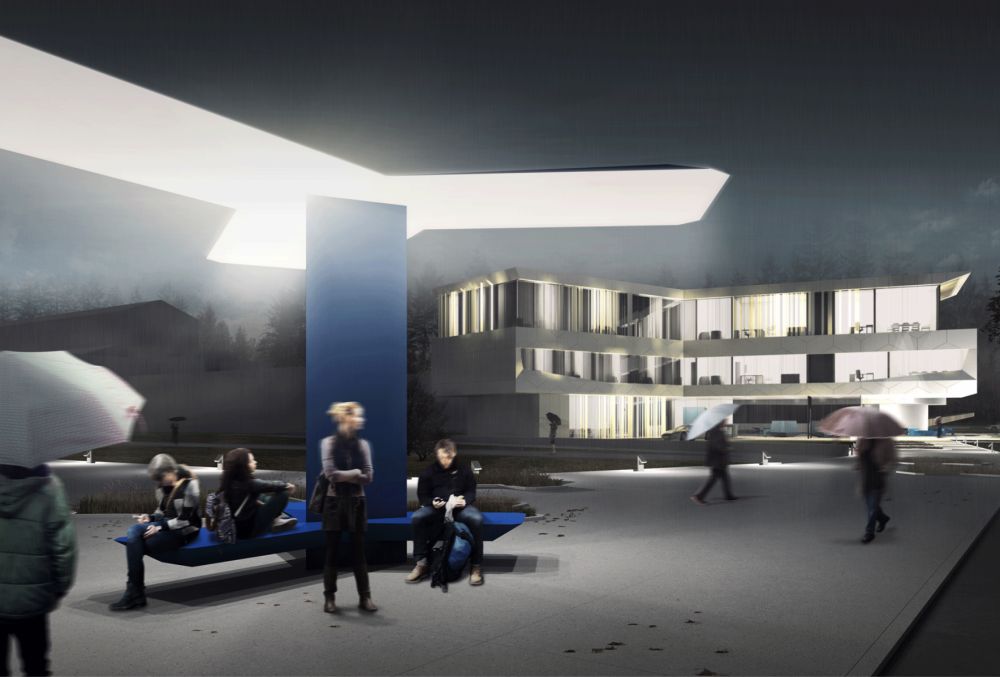 The transformation of the foreground of Chemical Plant in Police is based on the reorganization of the communication system and the creation of open green areas. The layout of readable walks, integrates the bus stop and parking for guests with the main entrance to the office building. The geometry of the building's projection refers to the symbol of sulfur trioxide, one of the components of complex fertilizers produced at Police Chemical Plant. The rotation and connection of two symbols allowed to find the necessary area and a semi-open courtyard. Places to rest or work mobile, based on Wi-fi network. The aforementioned symbol is also an inspiration for the layout of the building facade's divisions and the floor in its interior. The shape of individually designed luminaires is also based on sulfur trioxide. The dominant color of the façade and interior walls is white. According to the assumption, in this way, the titanium white produced in Police, will become a visible element of creating a factory's showcase. 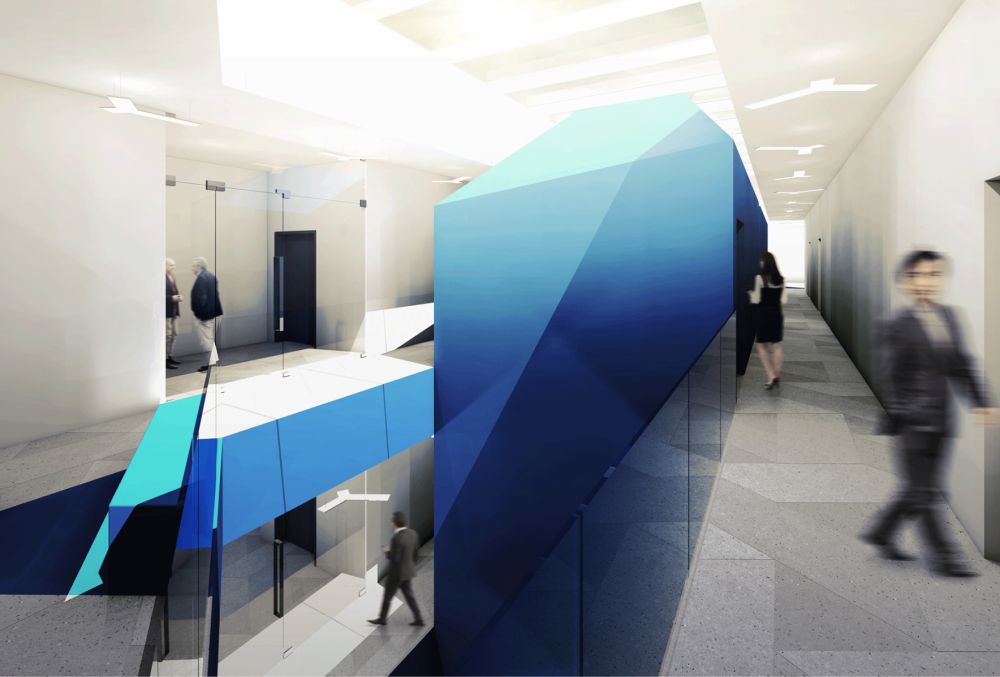 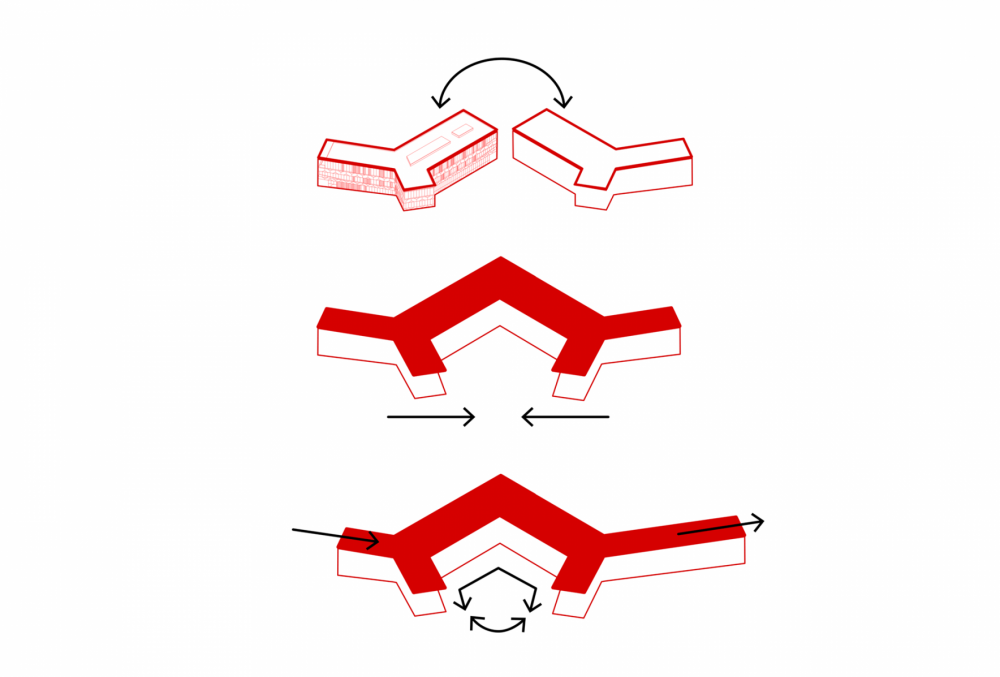 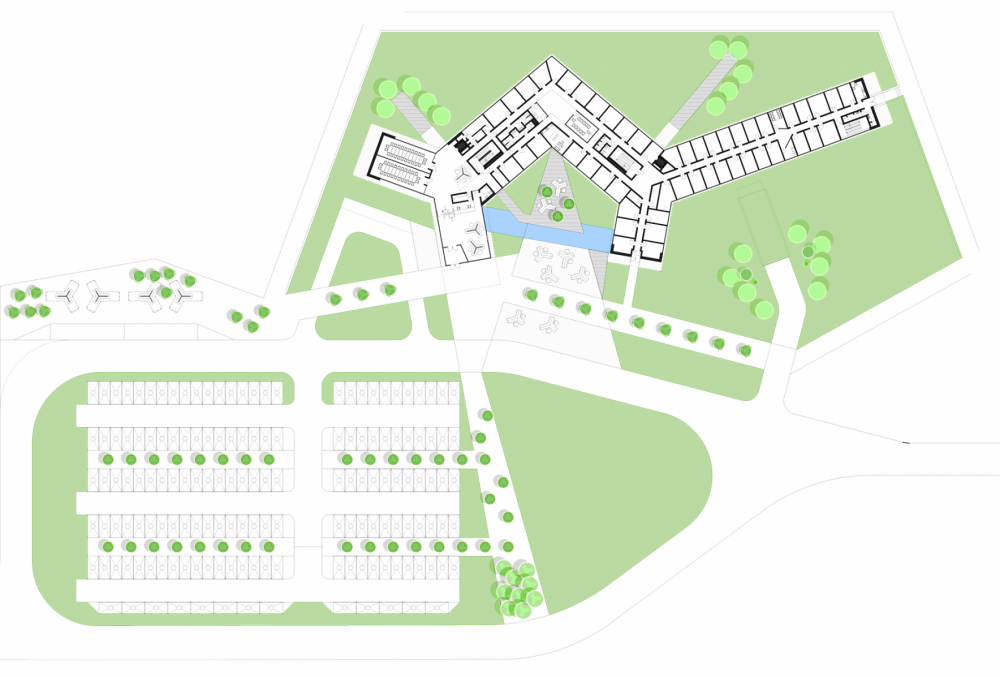 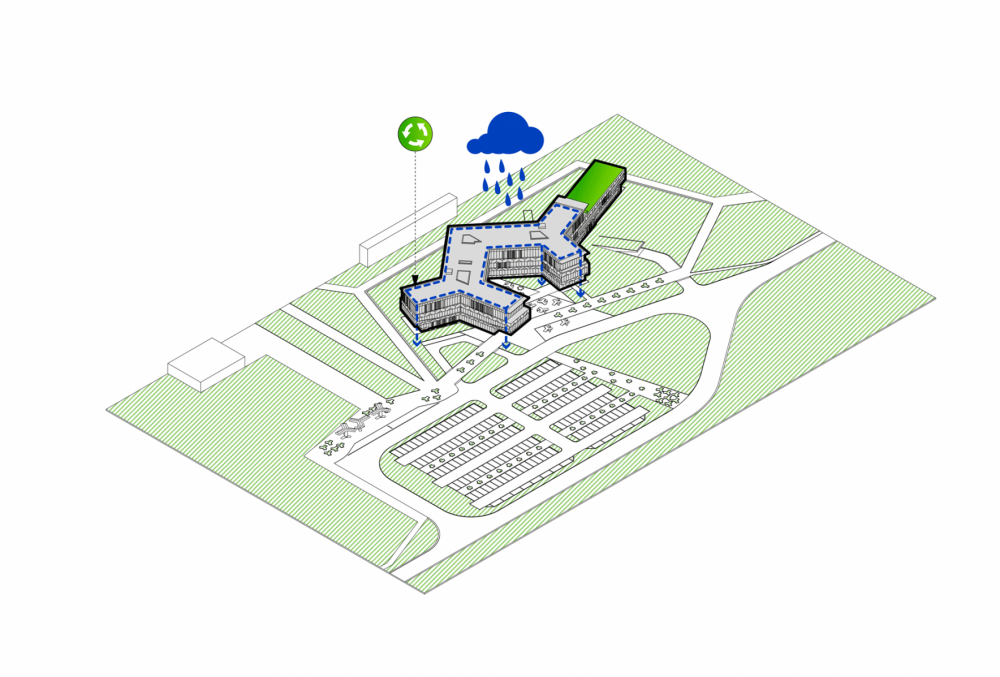 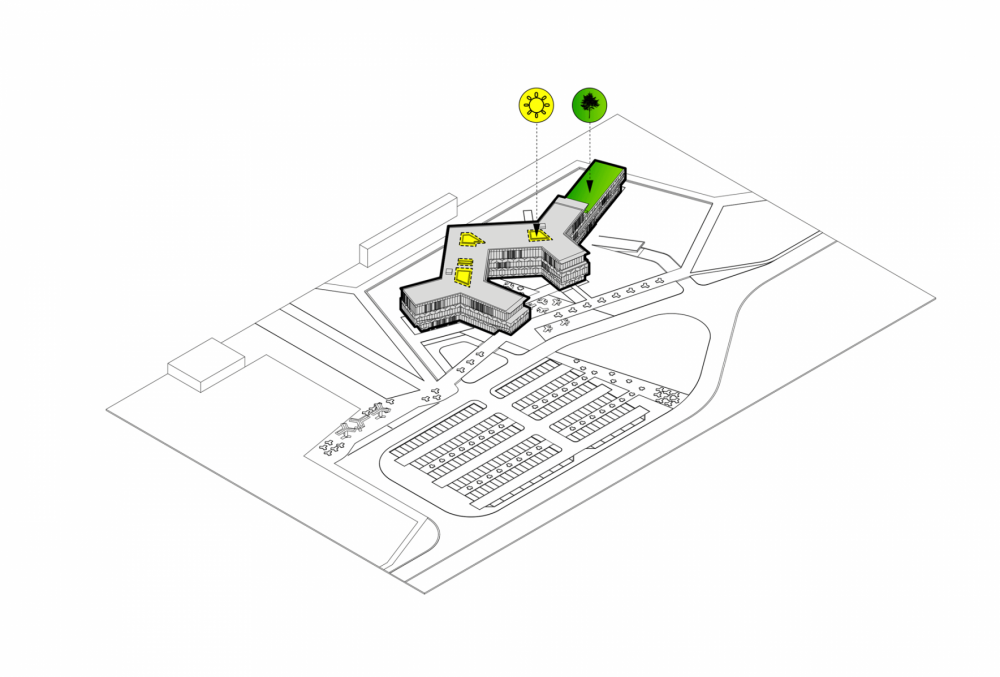 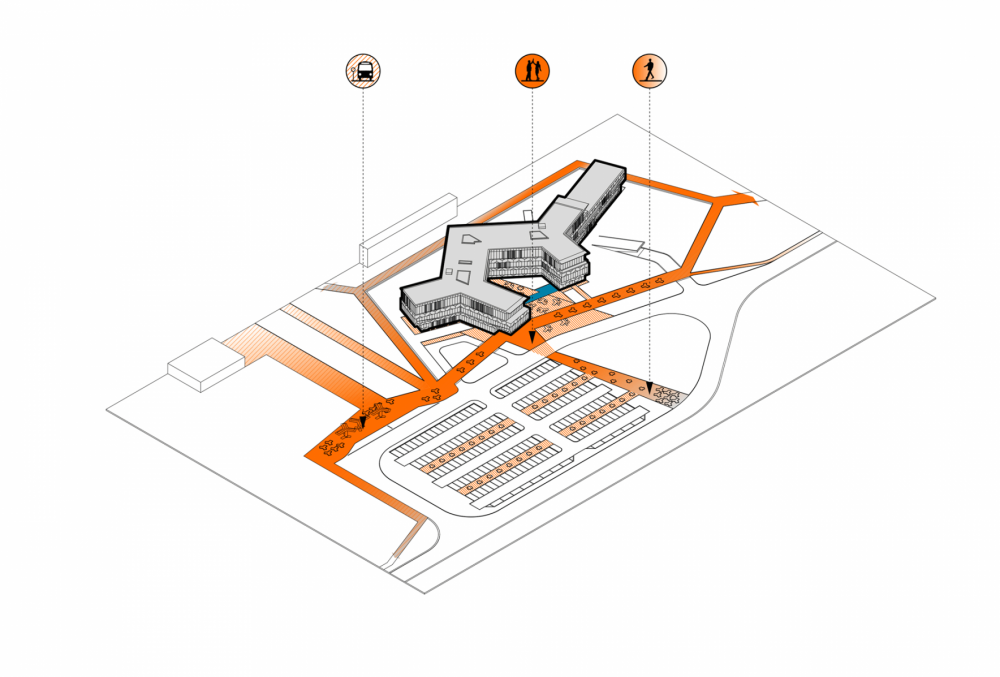 An important goal was the implementation of office space as a source of employees well-being and increased work efficiency. Shallow and bright office space. Filled with natural light, common spaces and conference rooms. Thermal comfort control systems and protection against acoustic fatigue. Element of a comprehensive strategy is caring for the reduction of pathogens and contaminants in the ventilation air. The facility was provided with solutions reducing the impact on the natural environment. Generators powered by waste steam from the plant provide heat and electricity. Electricity consumption is limited by luminaires, which adjust the intensity of artificial light to the intensity of sunlight. Rainwater collected from the roof, as well as access and commute is collected in the retention tank and used for flushing toilets and watering green areas. Louvers systems protecting against overheating of rooms and a ground heat exchanger, reducing the need for heating ventilation air in winter and cooling the ventilation air in the summer.