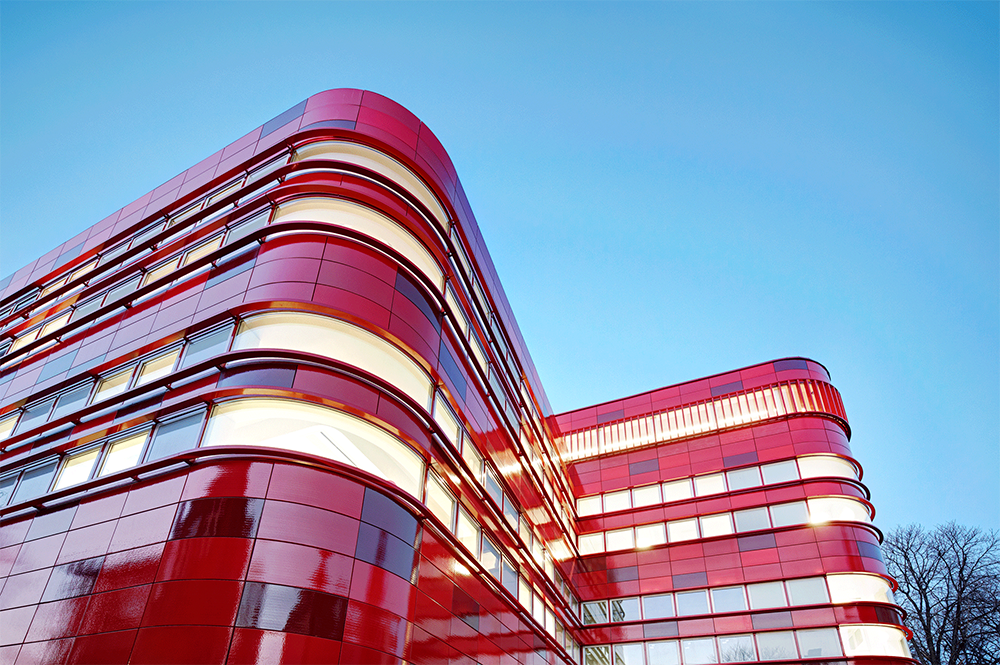 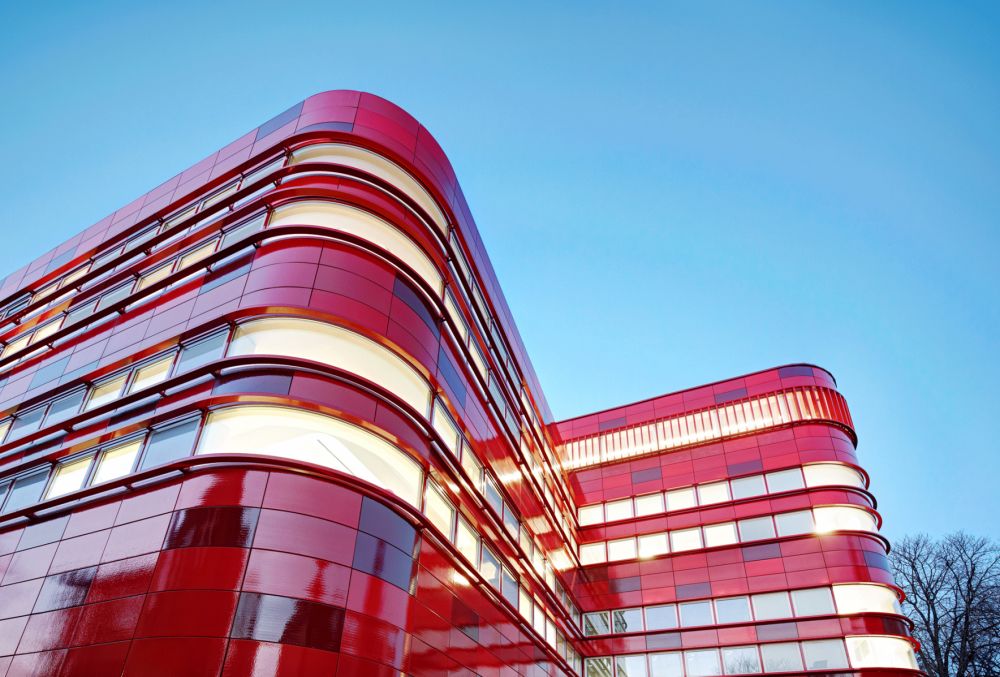 Modern laboratories, complexes of rooms for collection, processing and storage of blood and blood products, located on a cramped plot of land in the city centre. 2000 glazed ceramic elements, with a strong colour scheme is a reference to the Silesian building tradition. Extensive use of sunlight. 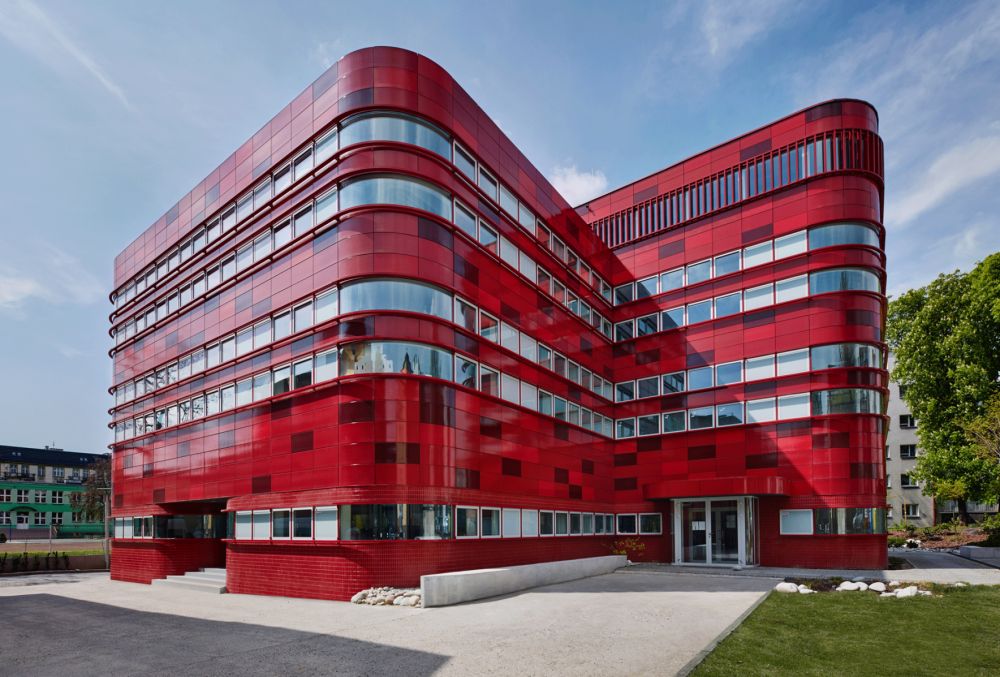 The facility is being developed on a narrow, built-up plot of land in the centre of Racibórz. A city that was one of the historical capitals of Upper Silesia. The investment area is located in a zone subject to conservation protection. Three stages of the investment, including a new RCKiK building, a shelter for a mobile vehicle, a blood collection centre and a Blood Cancer Diagnostics Centre, in an existing facility. The new building houses modern cold stores and warehouses, a blood collection zone, an extensive team of technologically advanced laboratories, offices and a conference team. In the building, in addition to collecting and testing blood, the processing and distribution of blood into individual components, including based on technologies based on radioactive materials, is being carried out. 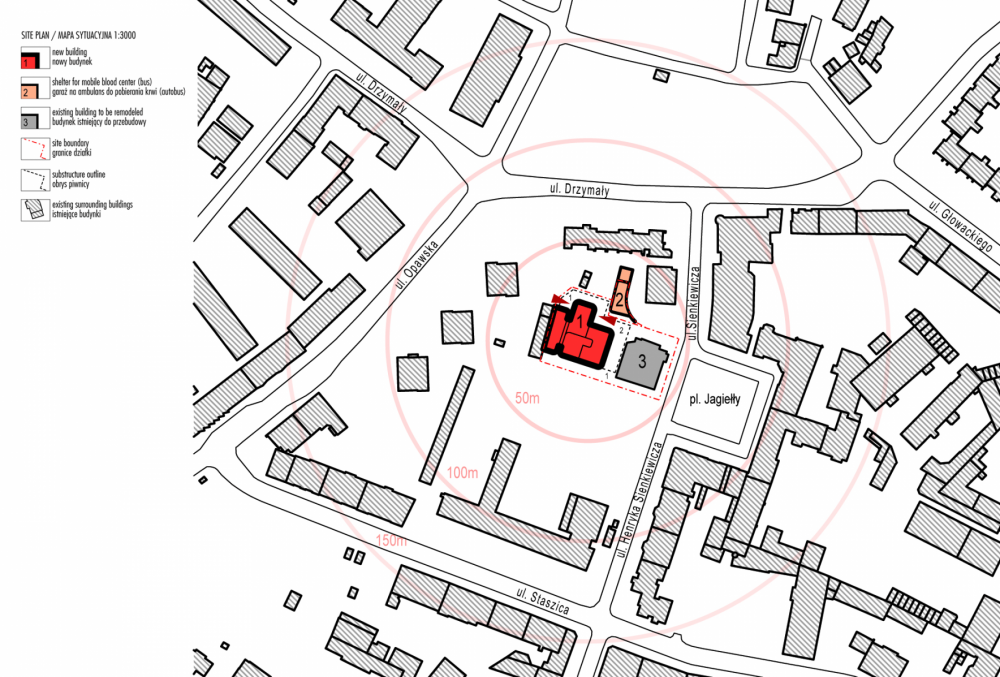 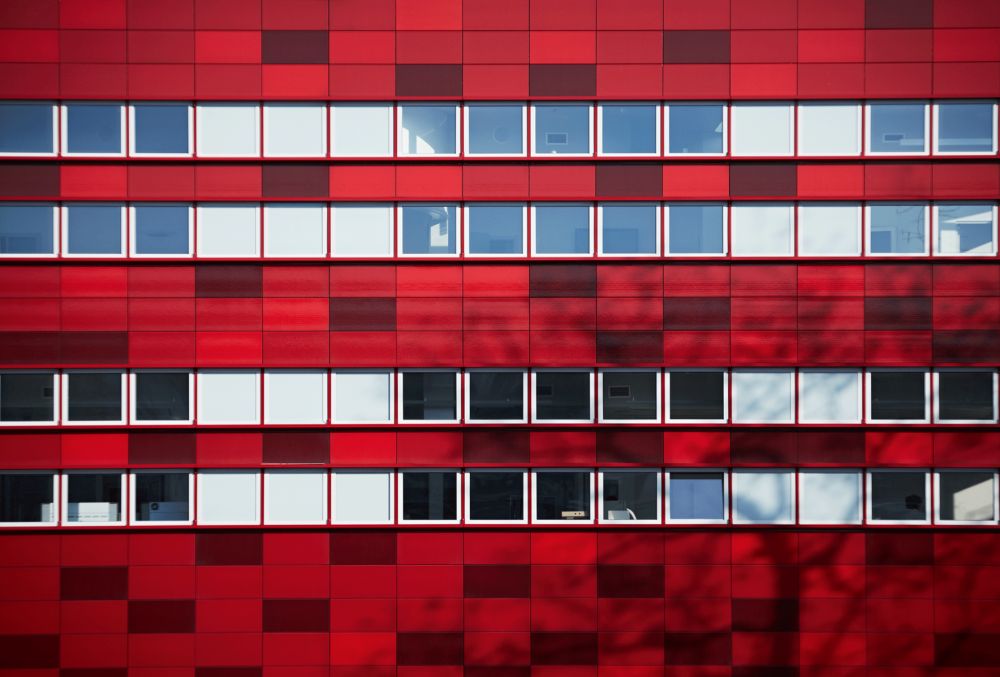 The colours, the irregularity of the motif and the gloss of the façade describe the richness of blood, often referred to as the gift of life. Geometry is inspired by the essence of the centre's activity, i.e. the collision of biology and technology. The visually surprising and bold colours of the centre are intended to draw attention to the idea of honorary blood donation. The elevation of the building is finished with ceramics. Small-sized tiles cover the ground floor. Glazed ceramic panels are mounted in the upper zone. 2000 elements, including flat ceramic plates and blinds, are supplemented by special fittings, used for the first time in Poland. Arched slabs, hand-formed in the steelworks, build characteristic corners of the building. The use of glazed elements is a tribute to the Silesian building tradition and the use of glazed bricks as a façade material (e.g. the centre of Katowice). The three different shades of red, from dark to very intense, are inspired by the colour of the blood, which varies according to the amount of oxygen contained in the blood cells. 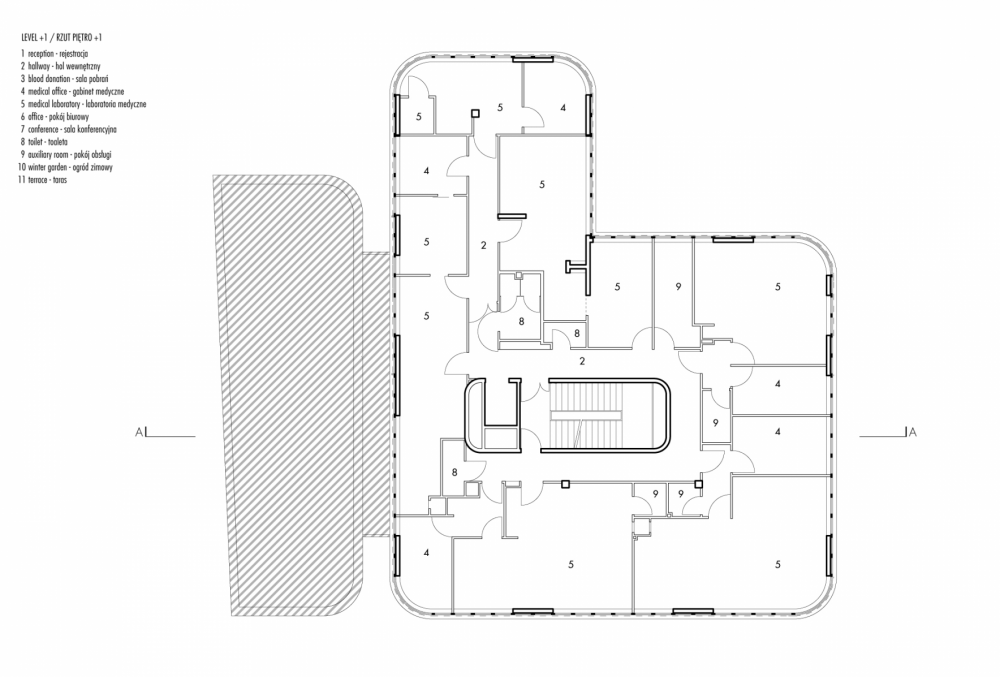 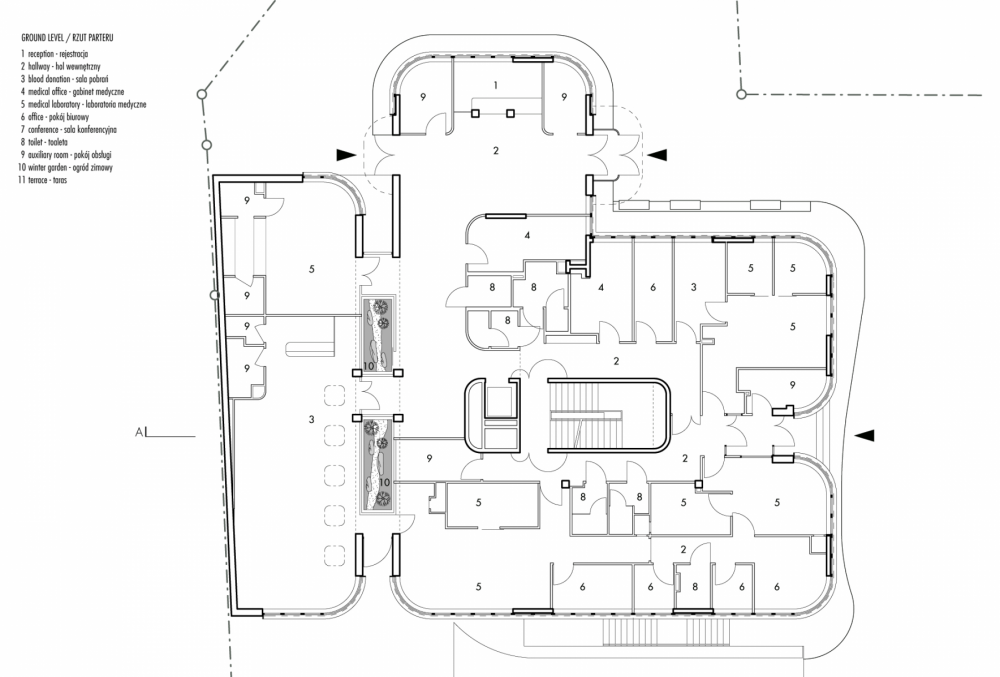 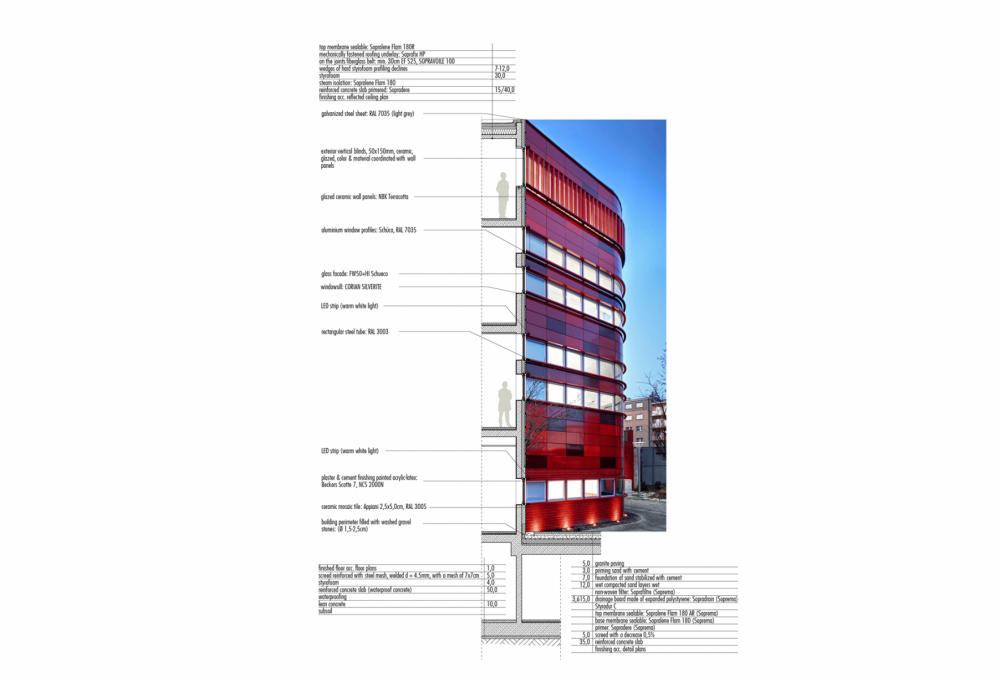 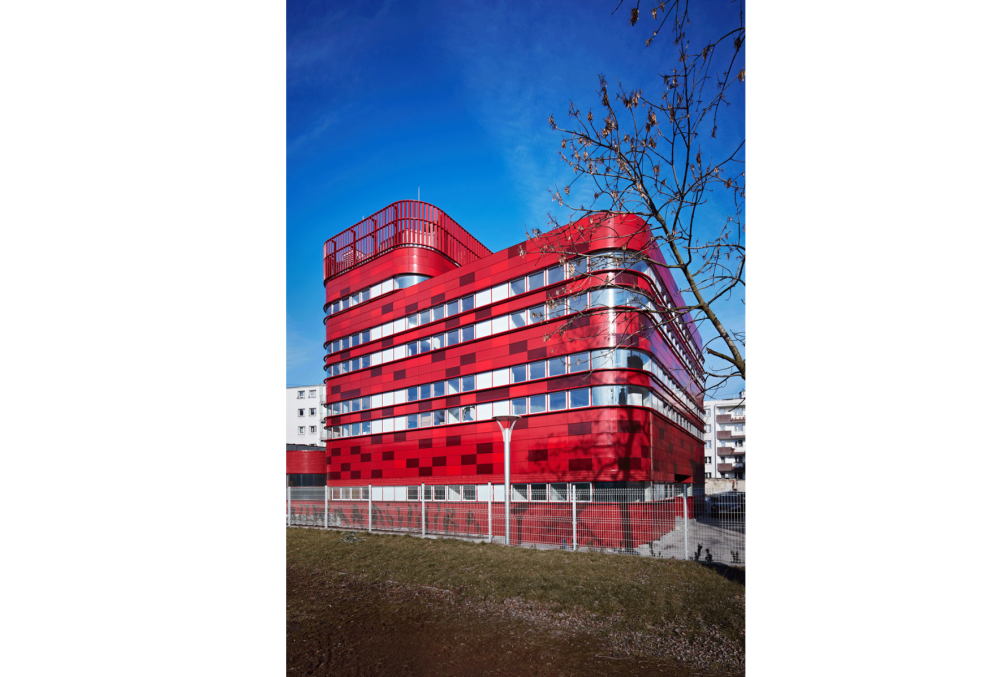 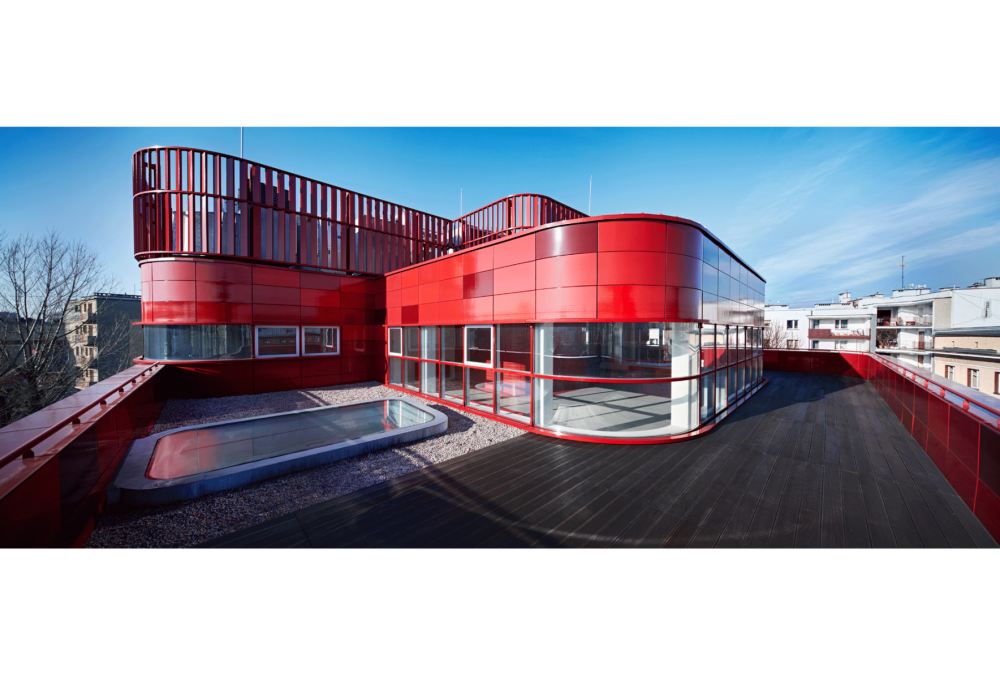 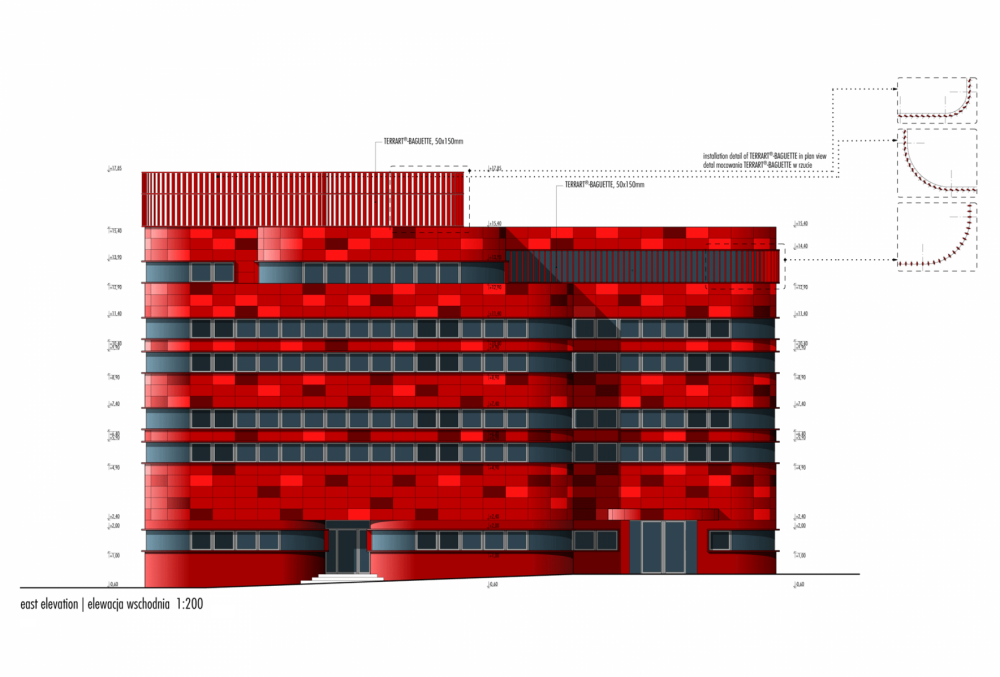 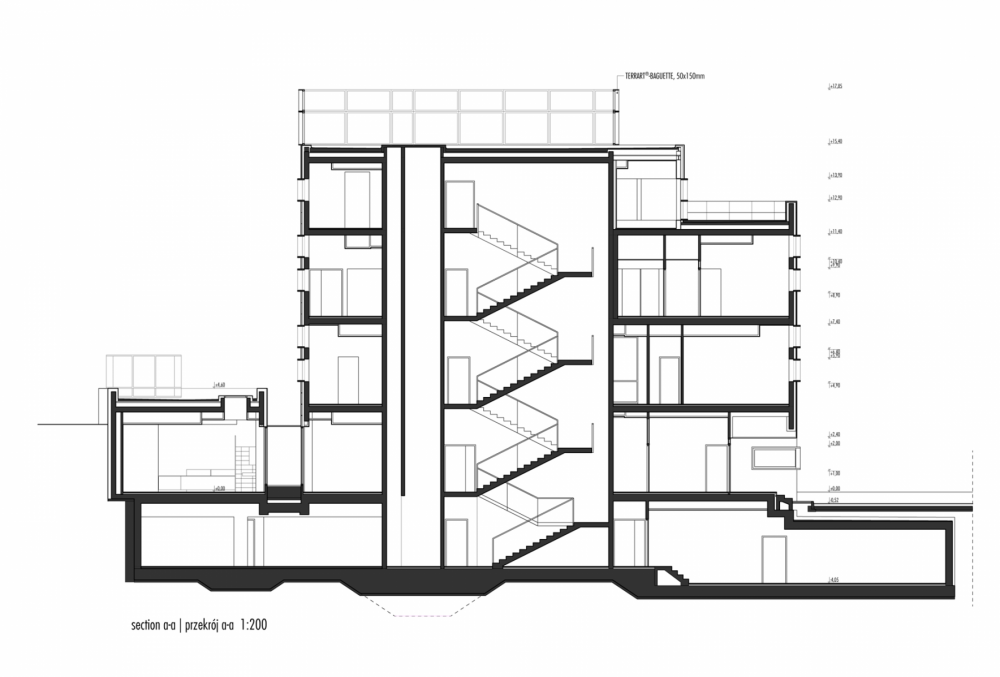 Most rooms are illuminated by two window strips. The strip located below illuminates the laboratory worktops located along the external walls. The strip located just below the ceiling allows natural light to be introduced into the farthest parts of the room. Thanks to glazing installed in internal walls, internal corridors are also illuminated. The interior design is based on the colours used in the elevation. In the centre of the projection, a staircase was placed, which was finished with red ceramics used on the elevation on the side of the circulating corridors. The red colour is present on the floors and the walls in the form of accents. Poor ground bearing capacity and pressurised subcutaneous water inflow are conditions that had to be taken into account during the first phase of construction. The soil reinforcement and tight trench casing, including the use of stream injection, protected the surrounding buildings and ensured the safety of the new building's construction.