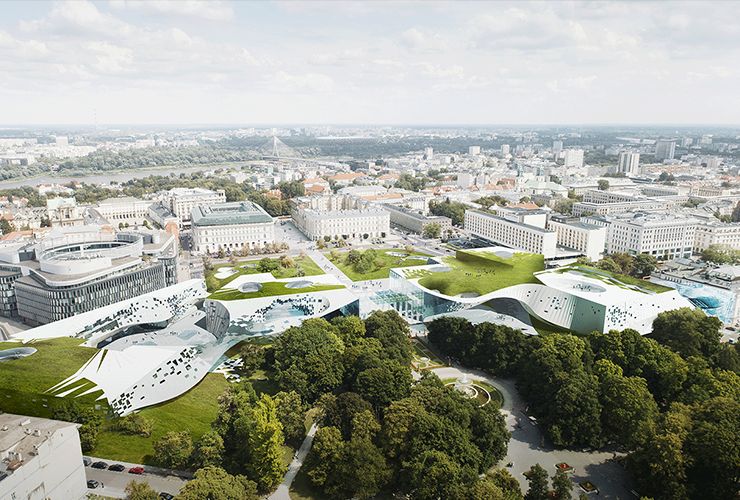 The intermingling of history and art, literature, music, film and design, science and innovation, together with nature – this is the essence of the intended plan for the space comprising Piłsudski Square [Plac Piłsudskiego] in Warsaw.
This place is to inspire interactions between people with different interests and to provide for varied forms of curiosity. The planned investment promotes the creation of urban ecosystems, where buildings integrated with their surroundings and the city contribute to raising the living standards of all inhabitants and actively support the struggle with challenges arising from climate change. The intended plan is a proposal for the permanent commemoration of Poland regaining its independence in 1918. 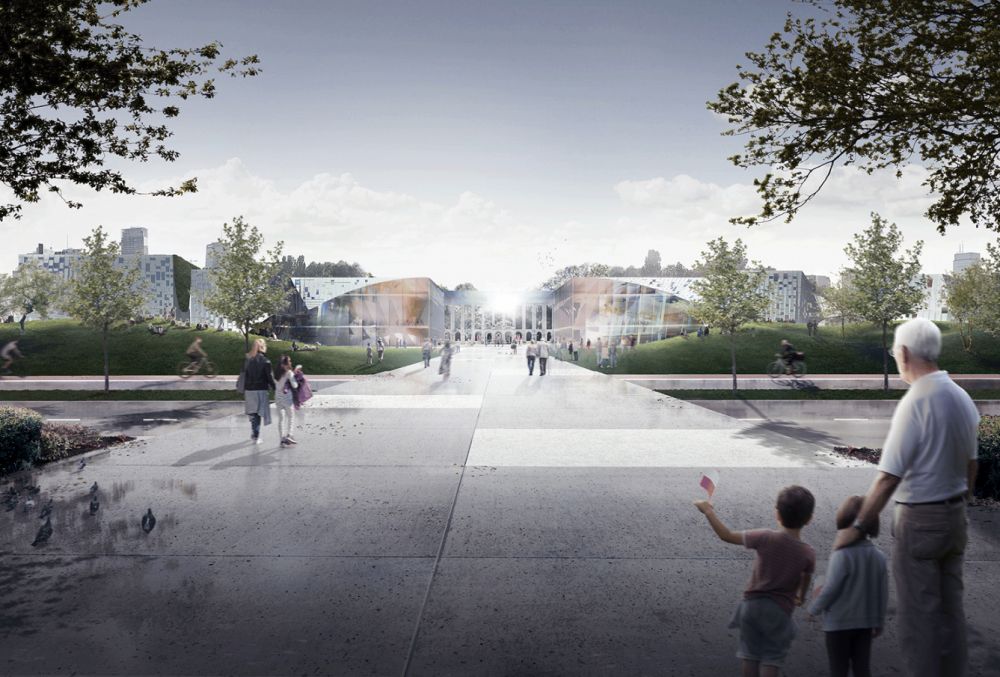 Openness, manifested through a multiplicity of routes at ground level will facilitate the flexible use of many functions located within the complex and of surrounding green areas, both those already existing, such as the Saxon Garden [Ogród Saski] and being created, such as Piłsudski Park [Park Piłsudskiego]. The project respects the history of this place, recalling the former building alignments and scale of sites destroyed during World War II. It stresses the exceptionalism of the Tomb of the Unknown Soldier, supplementing this narrative by creating a museum which recounts the idea behind this memorial. It makes use of existing, historical cellars in order to build identity of place The intended plan is not indifferent to matters associated with climate change. It envisages organising Europe’s largest cycle park, it reduces the urban heat island effect, and assumes harvesting of all rainwater, with no need to connect the development to the municipal storm water drainage system. Photovoltaic coatings integrated with glazing and elevation panels, together with pavements that transform the steps of passers-by into electric energy will reduce the electric power requirement of the planned complex. 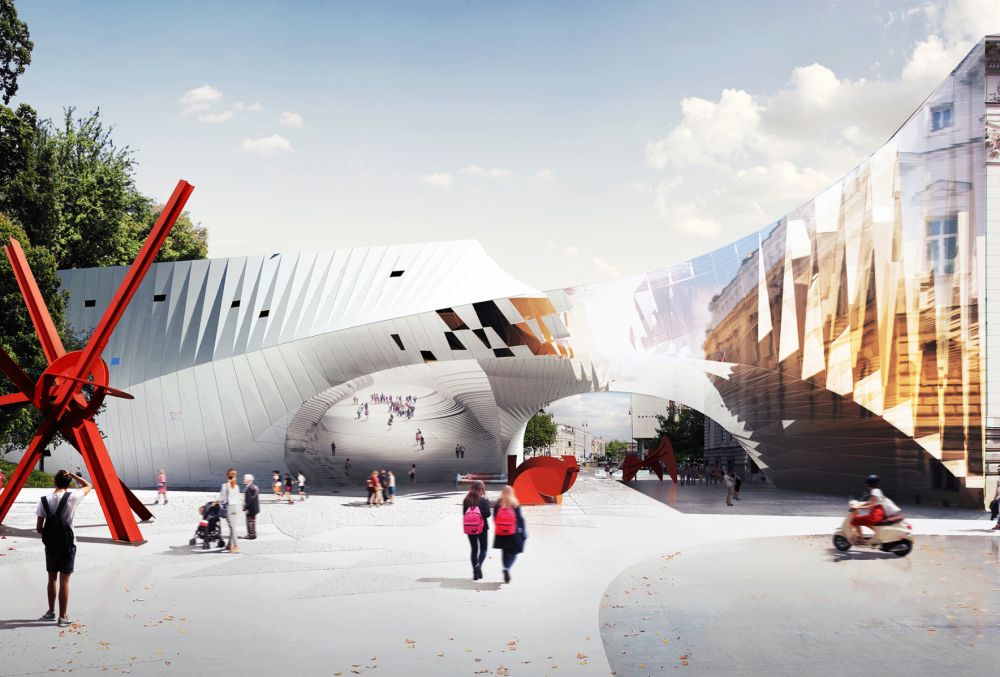 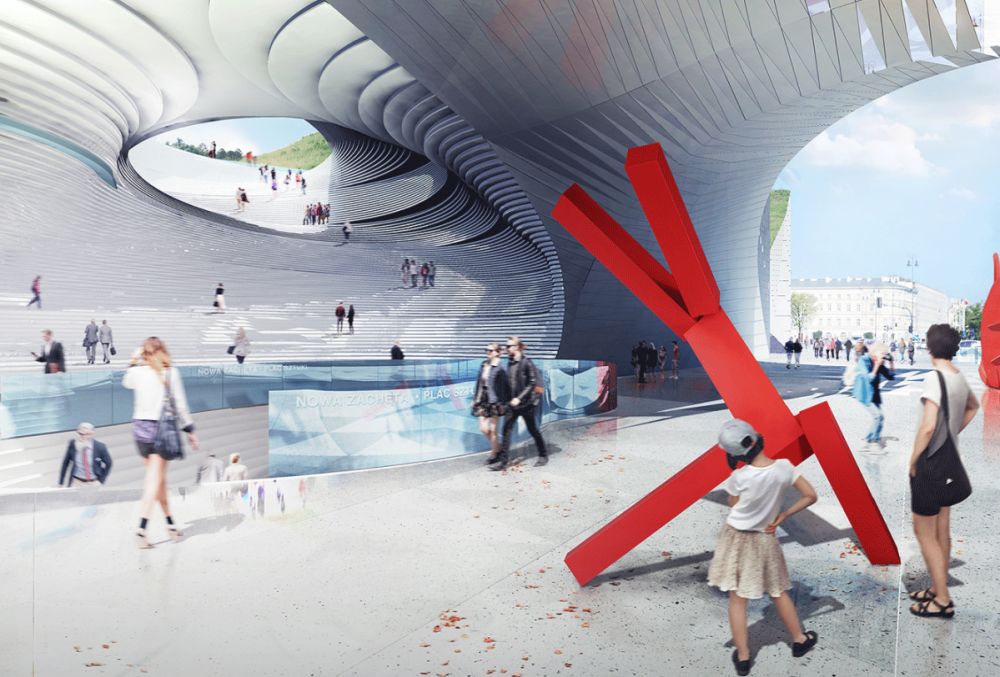 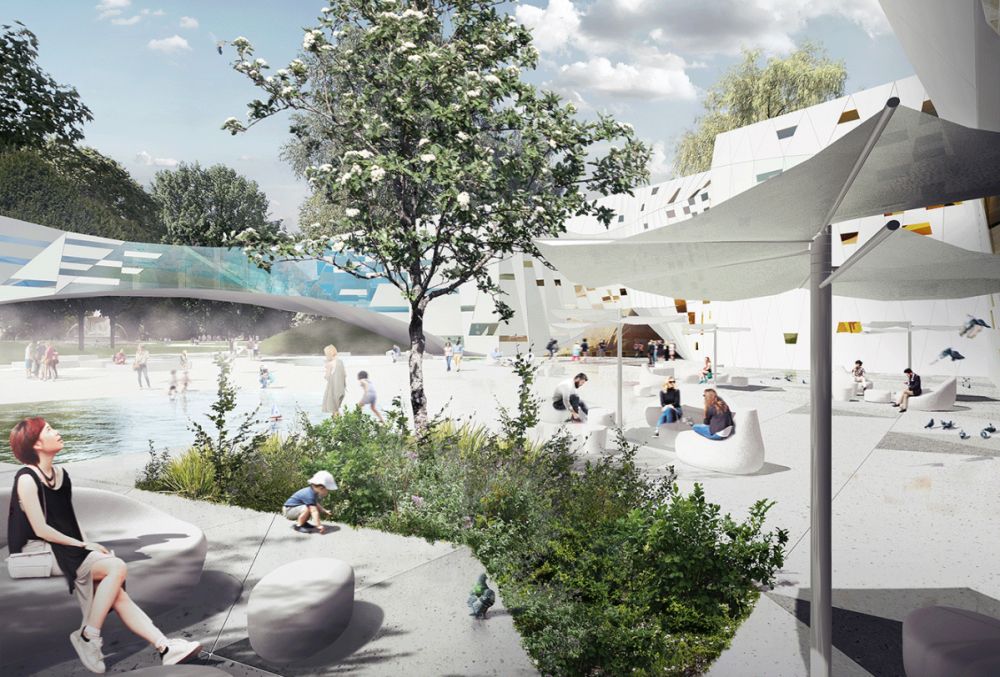 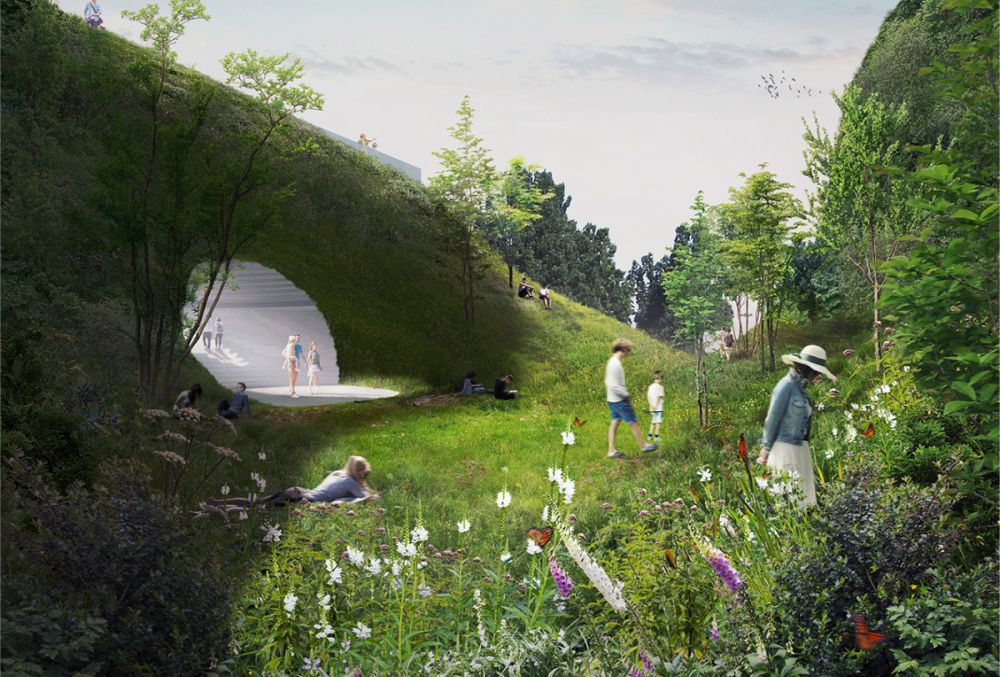 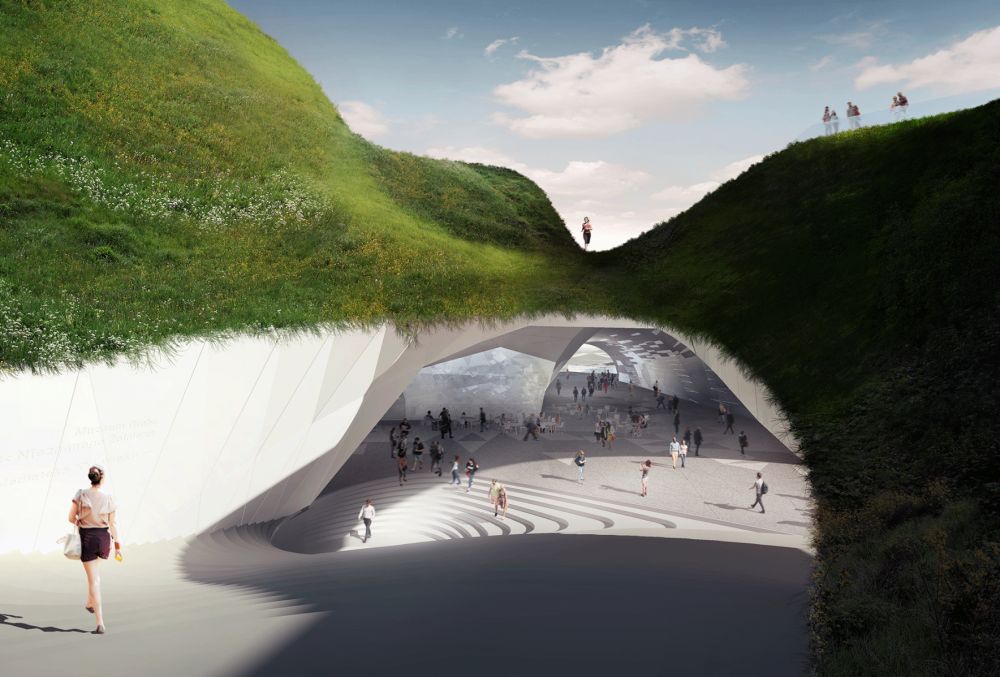 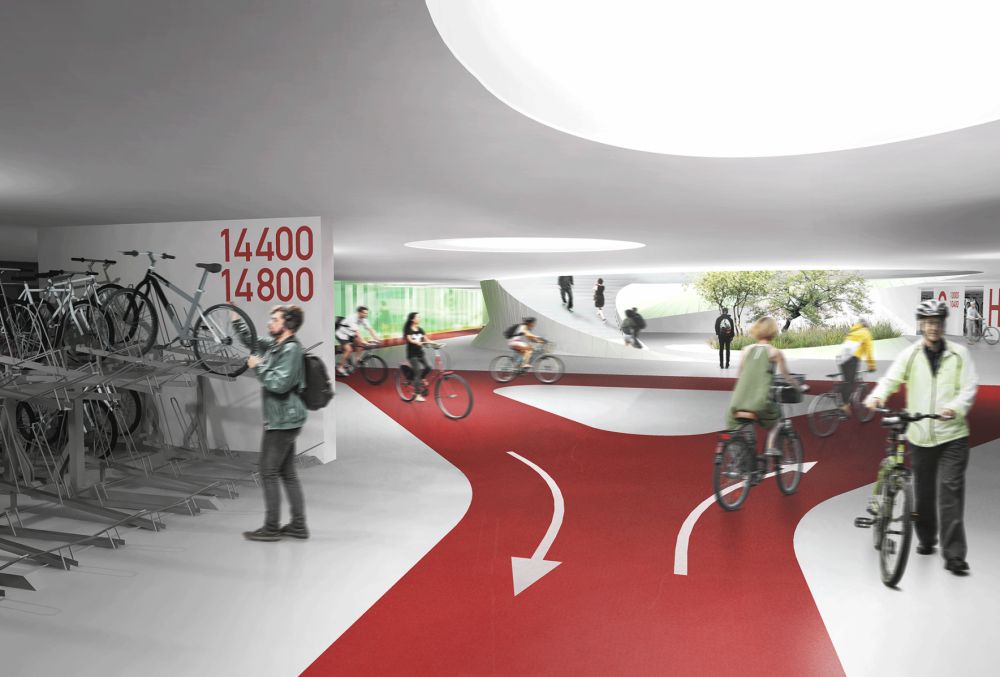 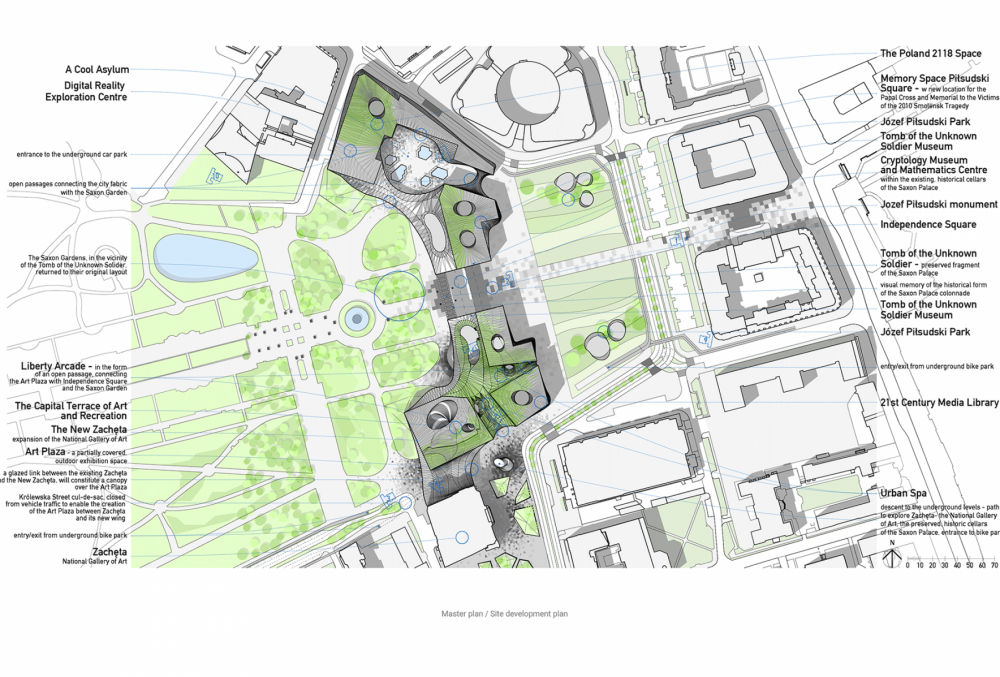 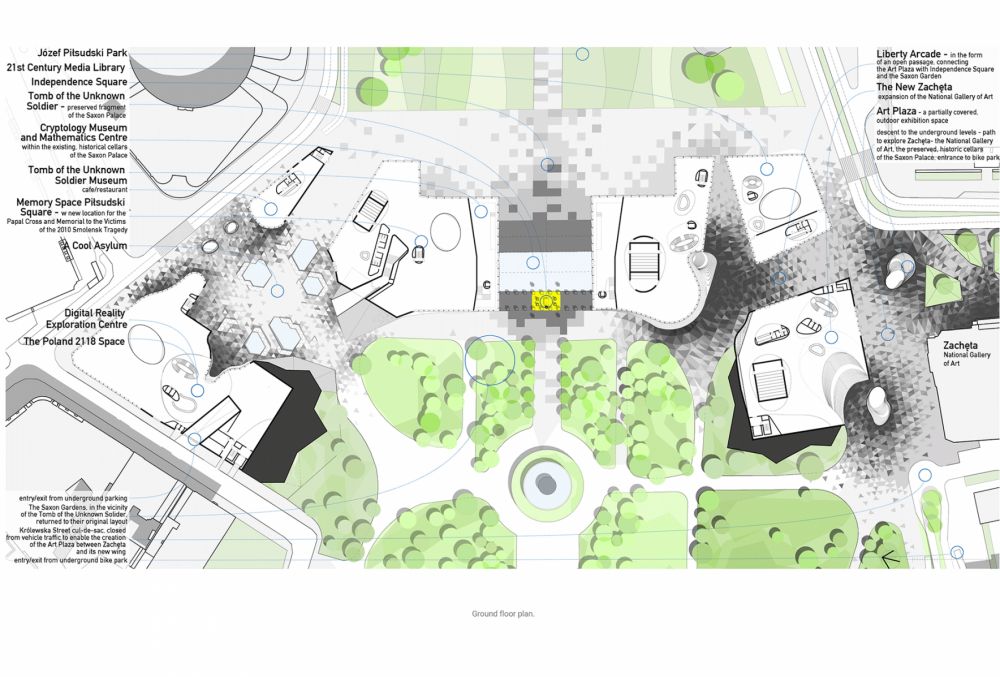 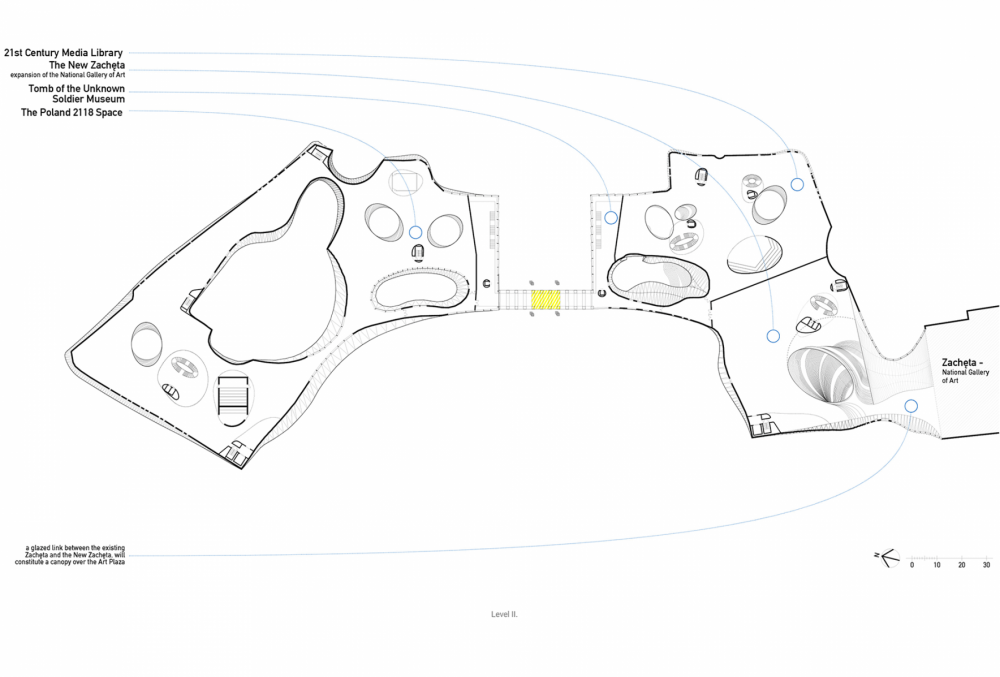 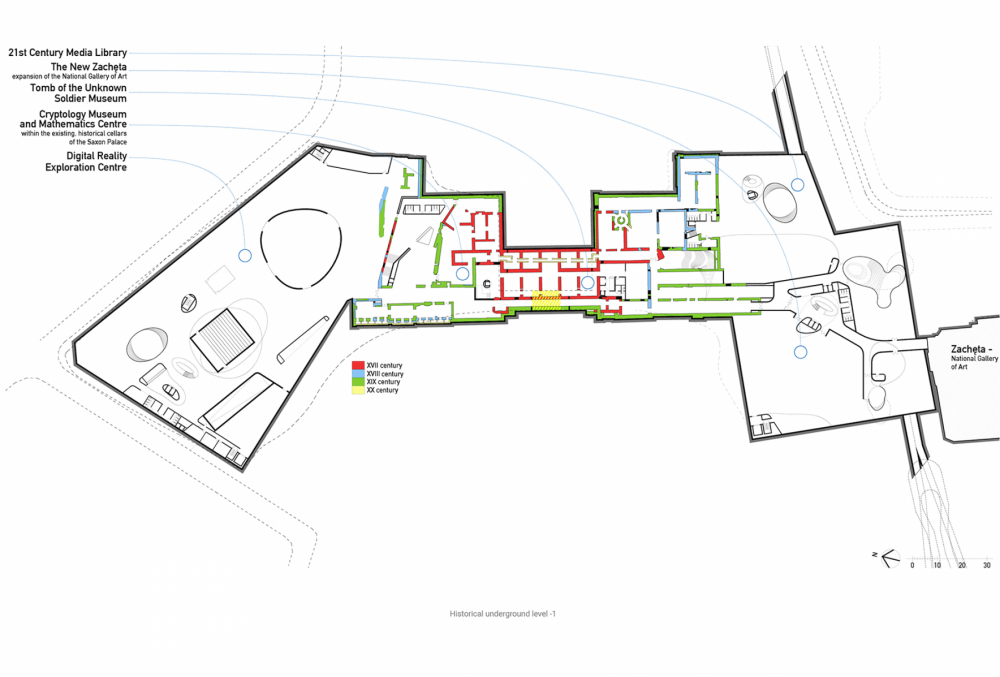 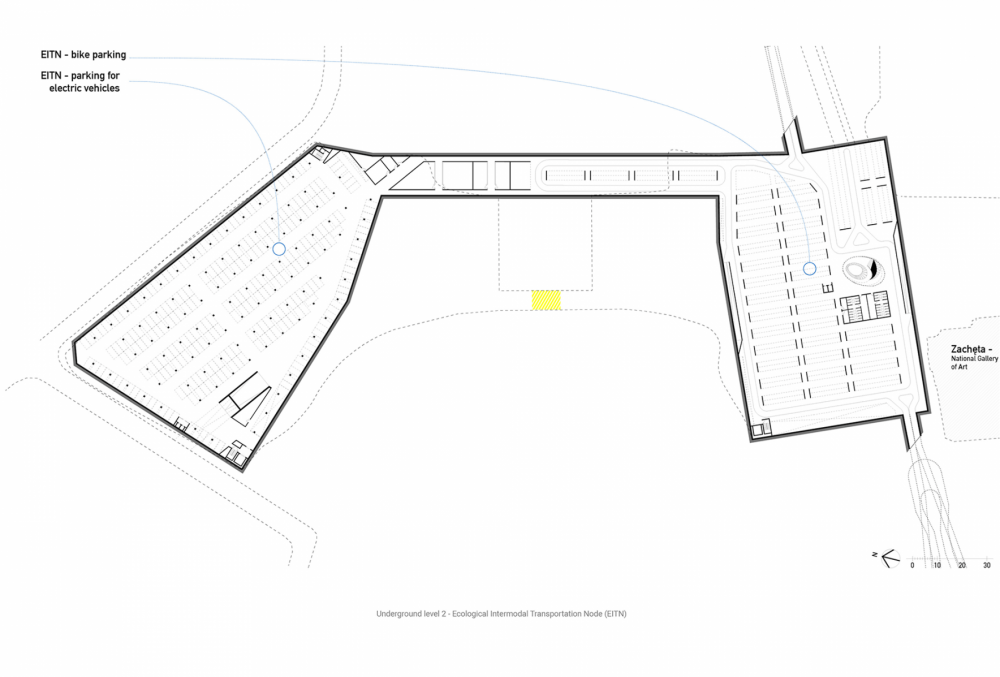 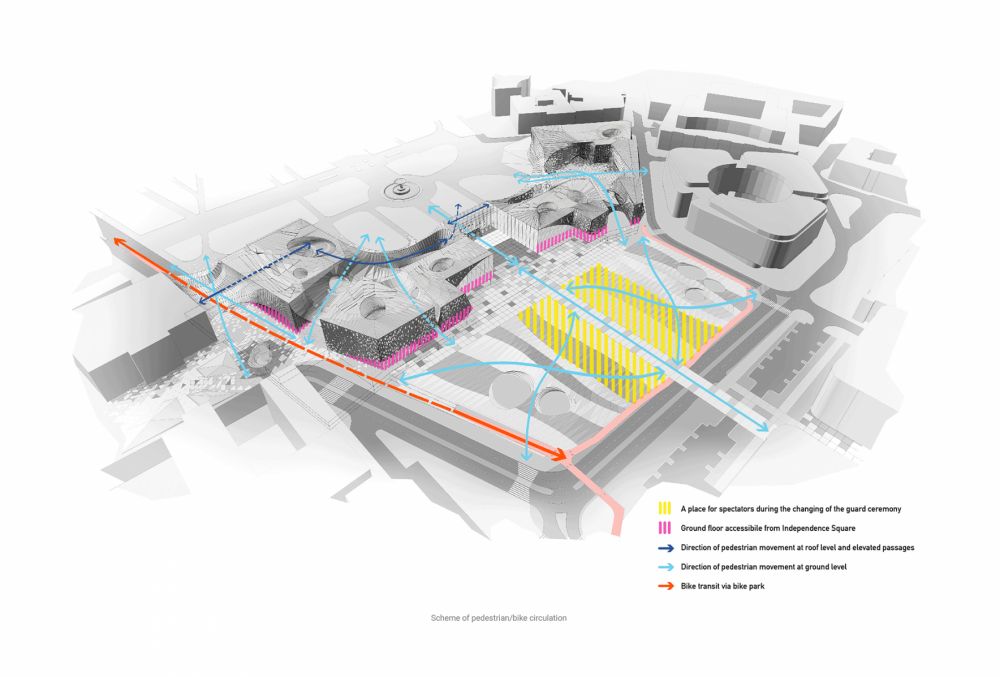 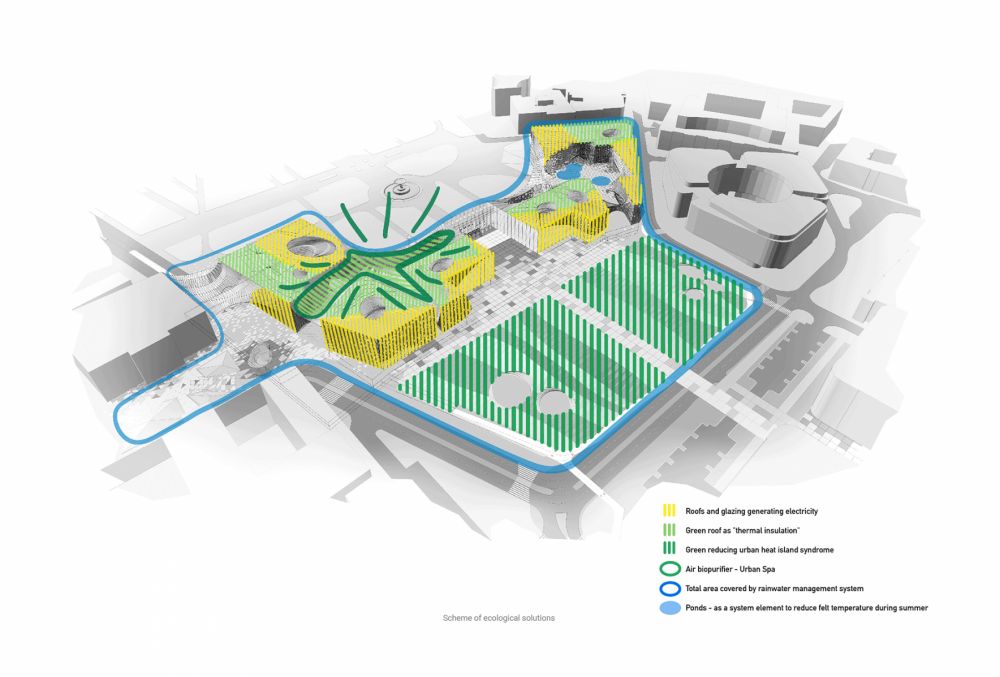 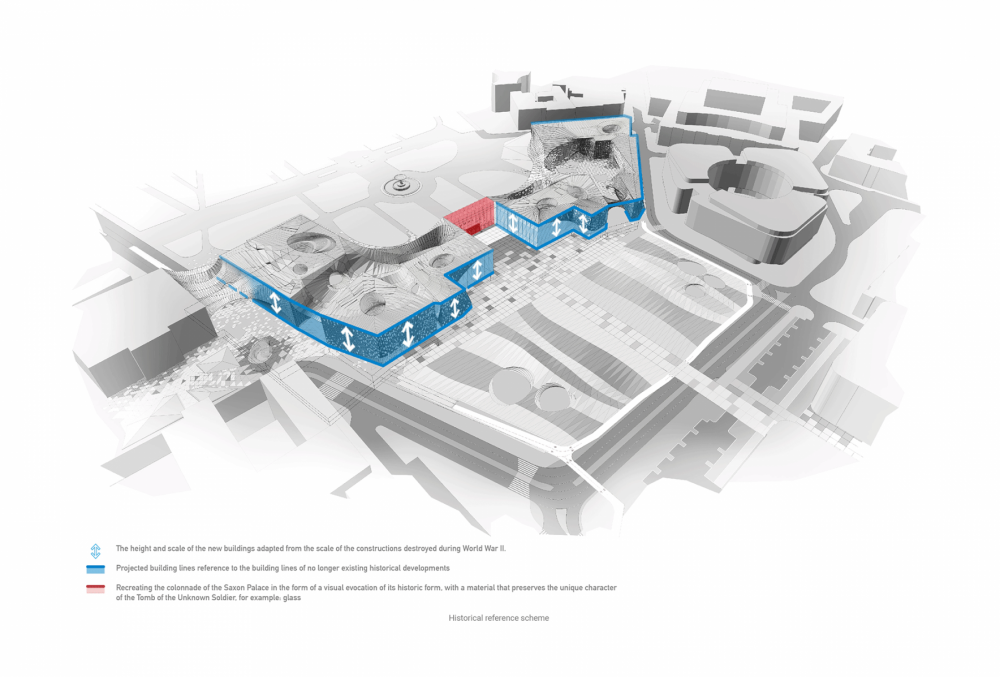 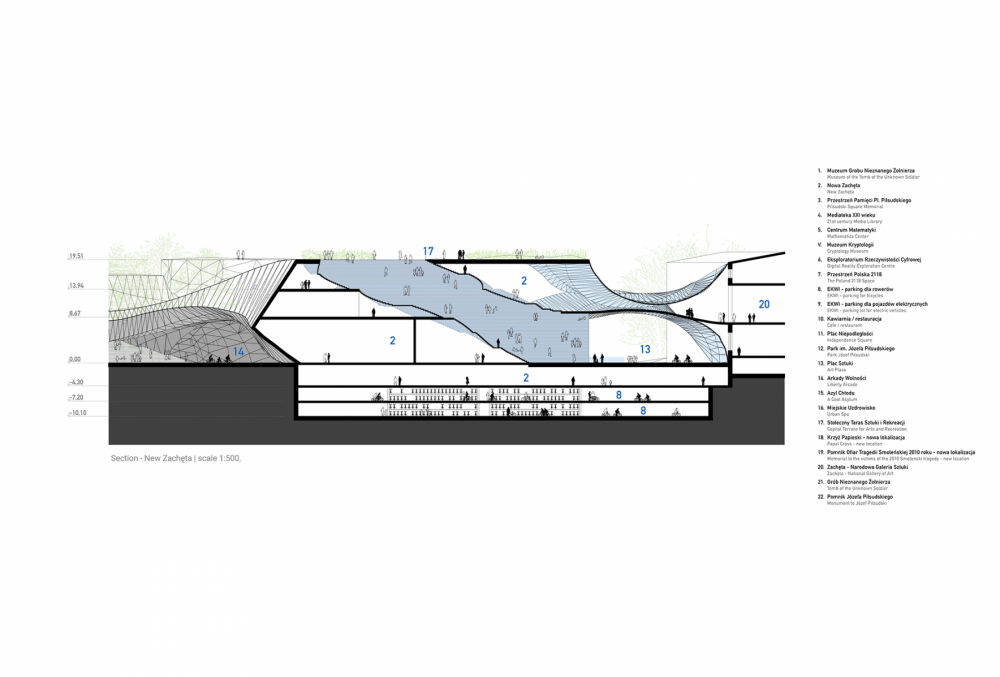 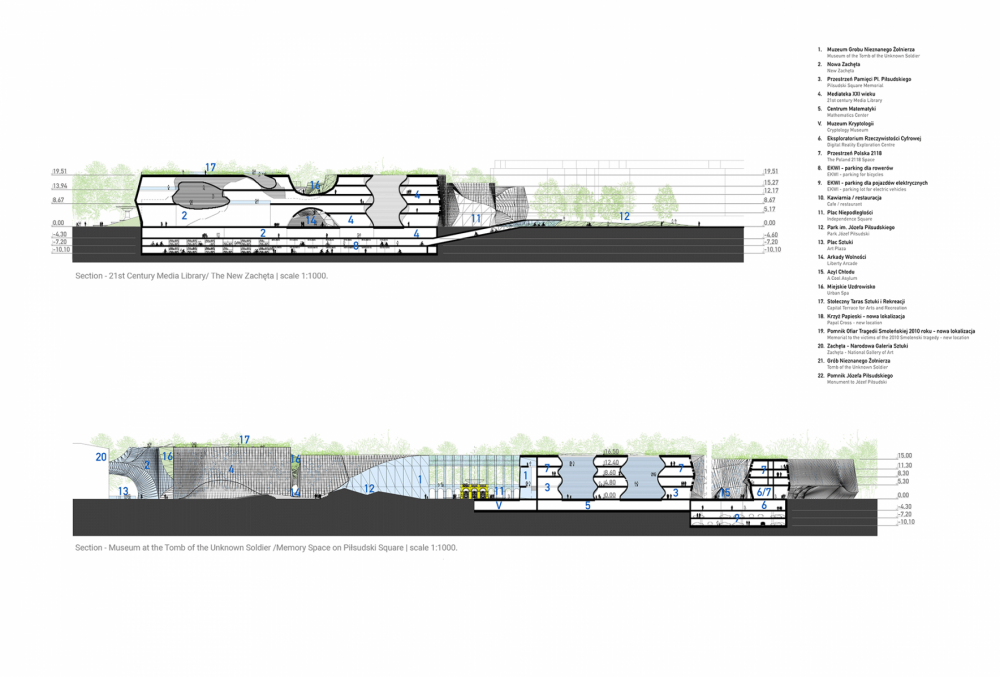 The planned Urban Spa is also to be an exceptional space. Everyone will be able to breathe air free from high concentrations of particulate matter and nitrogen oxides, and also to take advantage of aromatherapies and heliotherapies, interacting with outdoor exhibitions organised at the Capital Terrace of Art and Recreation [Stołeczny Taras Sztuki i Rekreacji]. Narrowed roadways with reduced radius cornering will bring about a real reduction in vehicle speeds to 30 km/h, optimal for reducing transport noise. The totality of planned activities will impact significantly on improving the acoustic “climate” of place.