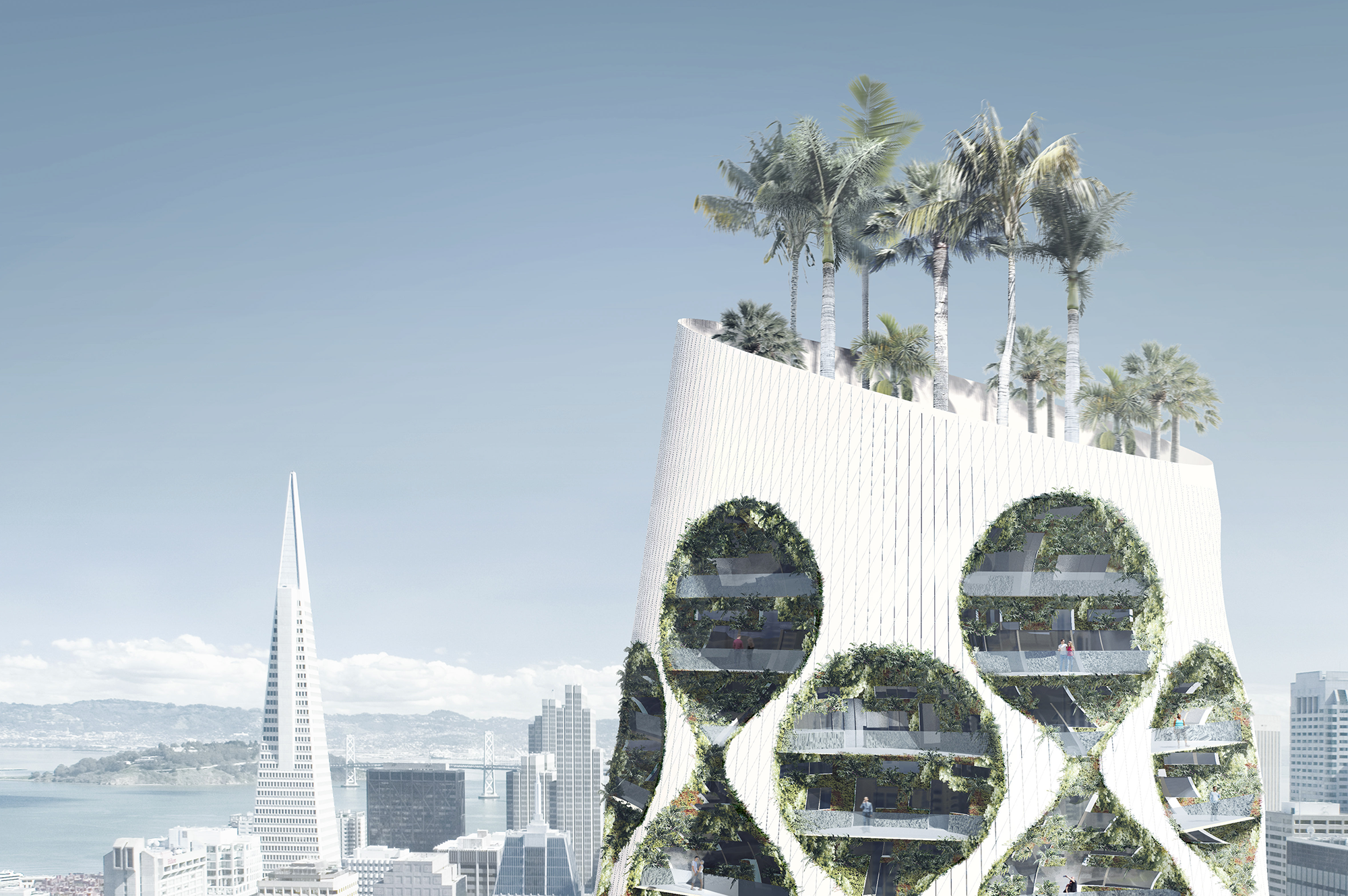 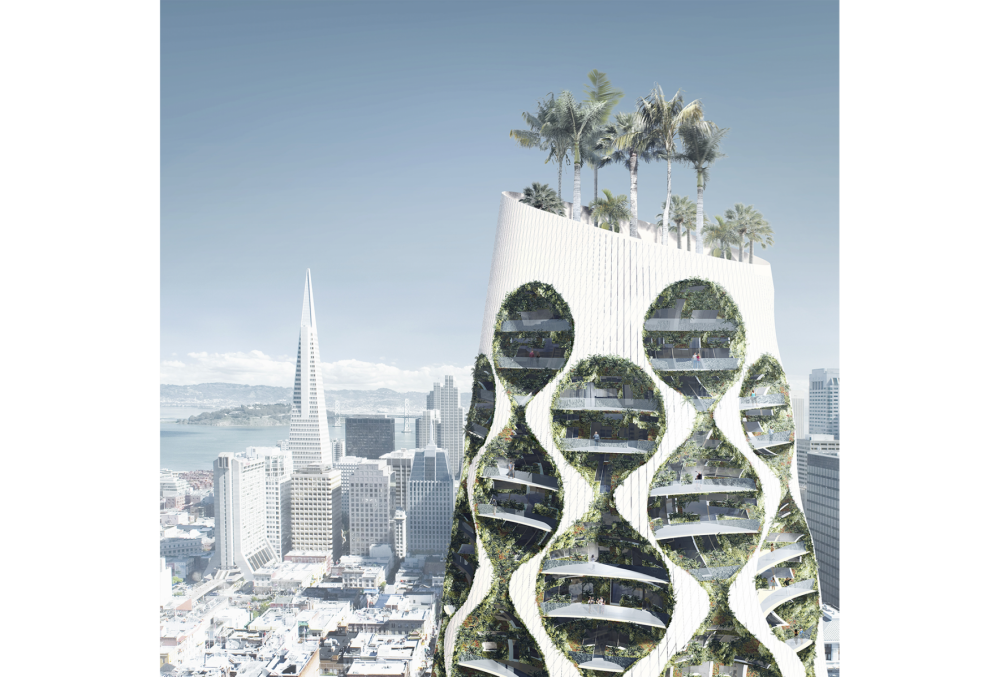 Collecting solar energy and converting it into electricity, reducing the building’s cooling and heat demand, the façade geometry generating shade where it is most needed, are the solutions that make up the building’s ECO-DNA base. The main goal, however, is to change the environment around the object. Combined with the inclusion of the facility’s users in the process of this change, thanks to the tools enabling the control, management and transformation of systems, including “green skin”. The scale effect will make it possible to create larger parts of cities, positively influencing the environment. At the end of this road, a new type of city emerges, where technology and biotechnology will help to offset the negative environmental impacts resulting from people’s natural needs – to have a place to live that they need and enjoy. 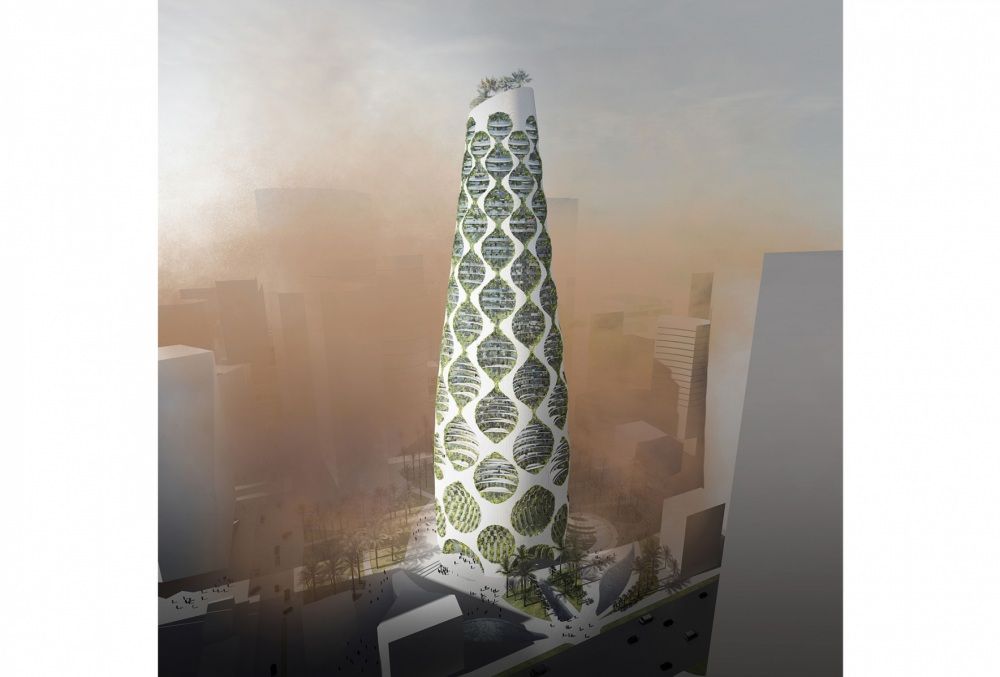 A prototype building, the Vertical Oasis Building, is given the geometry, which helps to achieve eco-goals while in the area of aesthetics, it complies with the ECO-DNA of the building. Thought to be located in densely populated towns, it took example on the multifunctional buildings including retail, office, hotel, and residential spaces. When combined with the ground heat pumps, it acts as the local heat distribution centre for the buildings surrounding it. 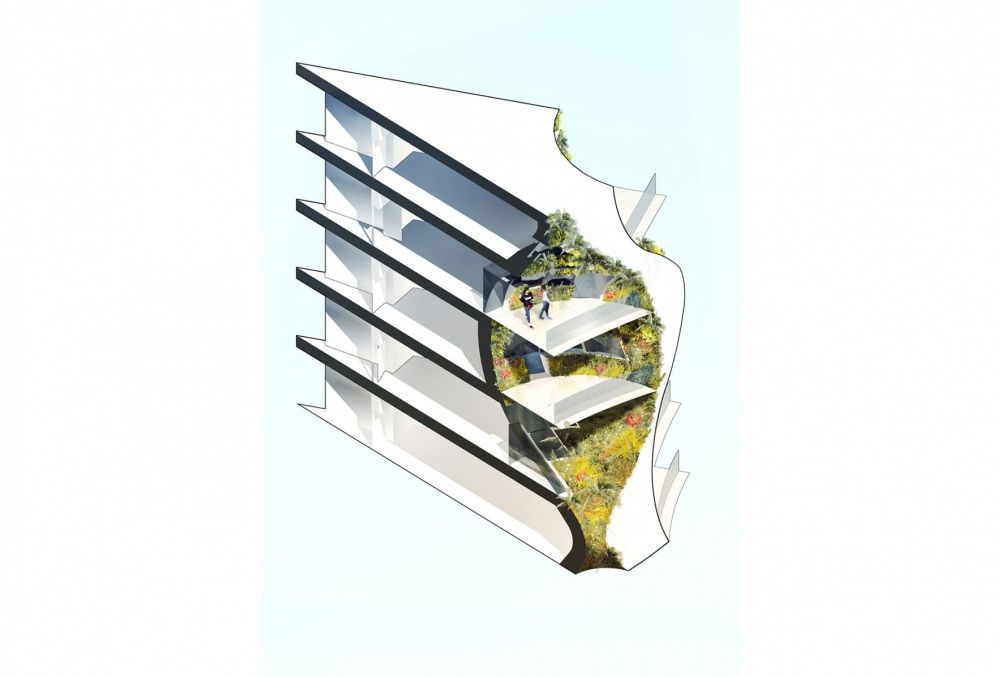 Each of the components, creating the external layer of the building plays the most important role. The white opaque parts of the facade are made of BIPV active panels while the glazing is using clearview power technology. They both are responsible for the production of electricity, harvested from the sun. The prototype layer of the building is designed to withstand harsh weather conditions. The matrix of the plants and microorganisms is individually specified depending on the location and its challenges. The layer reduces the demand of the building to cold up to 66% (calculated with the Arabian Gulf region), and heat by 30% (calculated for Sweden). 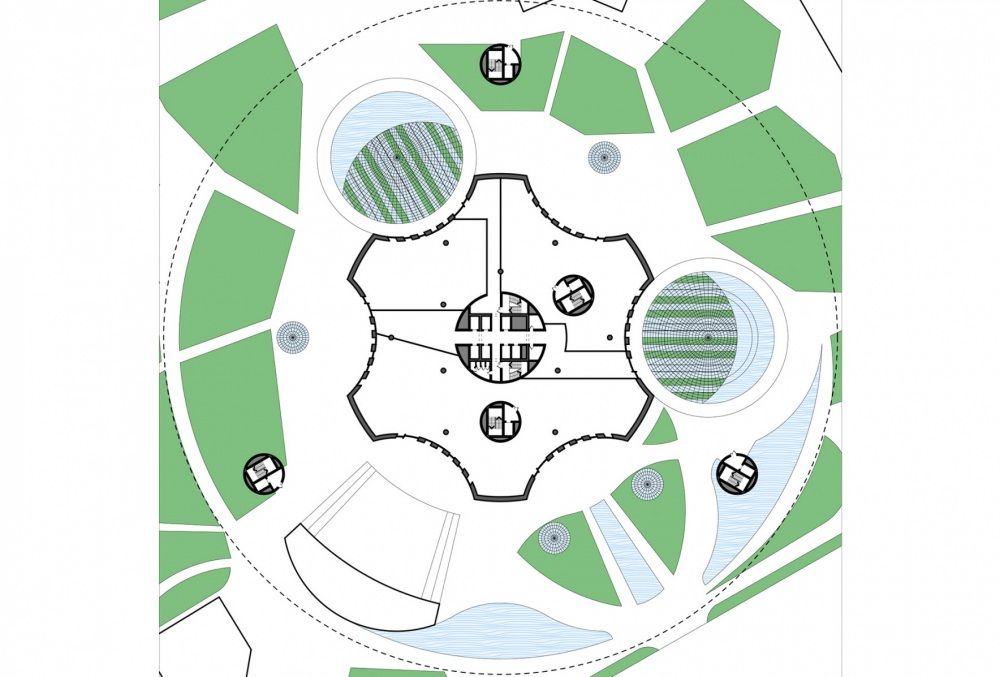 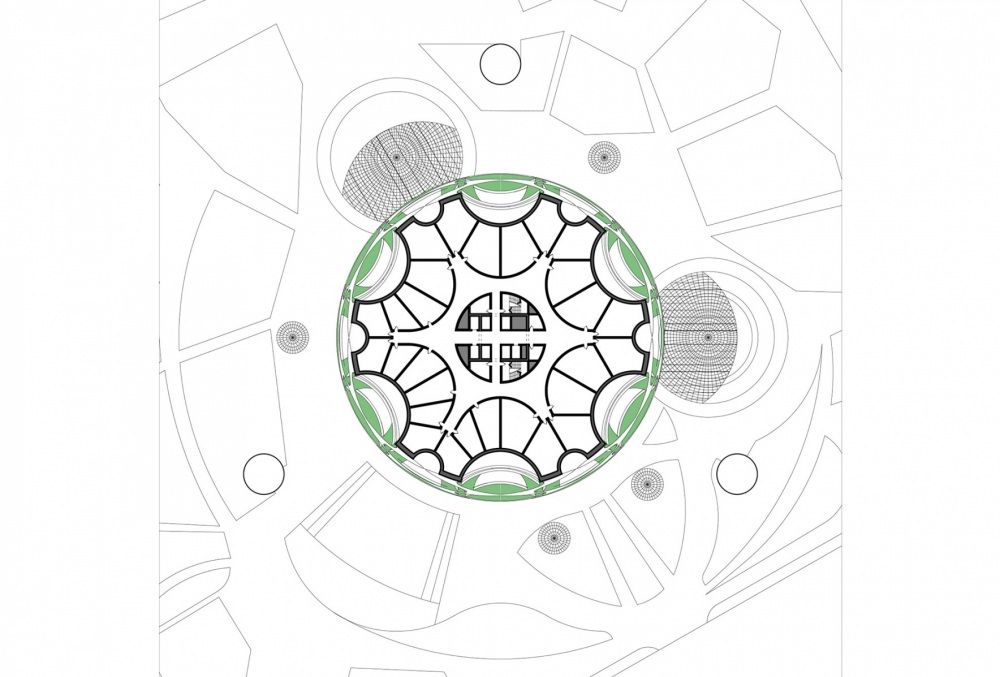 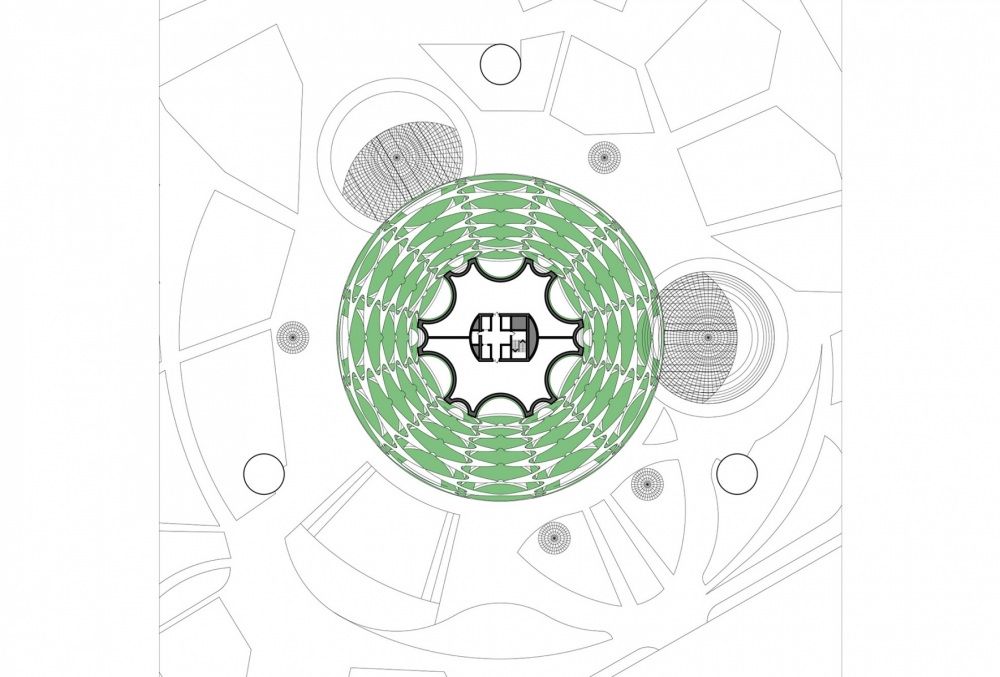 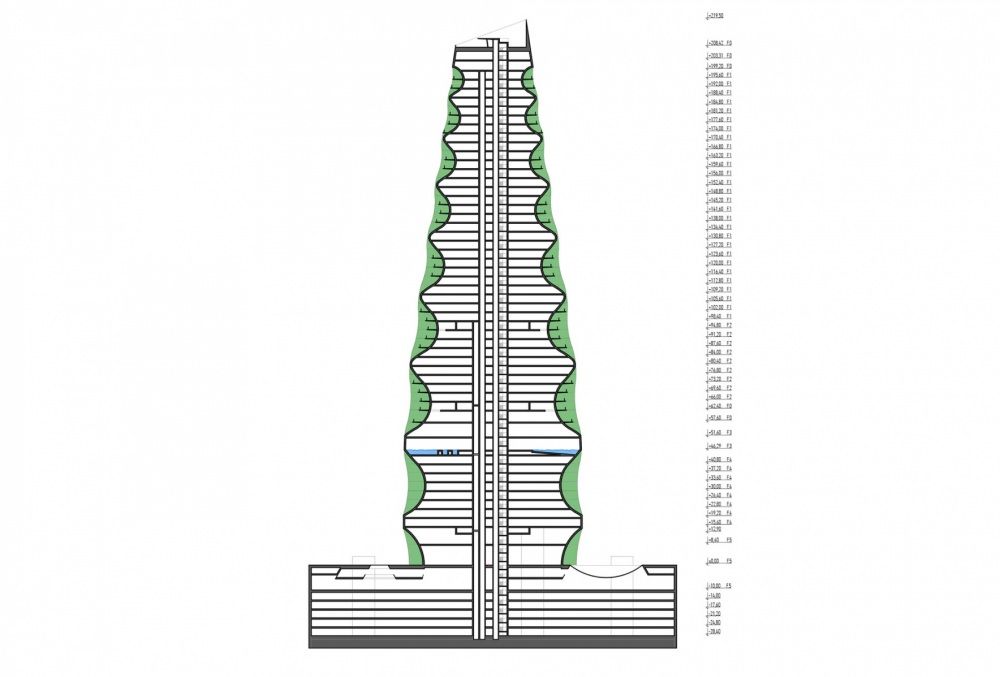 The vertical garden, located within designed niches, is composed of the multifunctional VOS WCC modular panels. This technology, developed by means of research and development process, is responsible for changing the environment in the vicinity of the building. The combination of carefully selected plants and microorganisms, supported with building systems and closed-circulation strategies, purifies the air of CO2, NOx and PM pollution. The natural process of transpiration helps to humidify and cool the air. The composition of chosen plants helps to reduce noise pollution due to their absorption and deflection properties, as well as sound wave refraction. The green layer is the vital element of the stormwater management, within the site as well as the close vicinity of the building. Depending on the location of the site it might exclude the necessity to connect the building to the local rainwater networks. The green layer is meant to be a house for different life forms. As an amplifier of the bio-diversity, it helps to preserve species threatened by extinction.