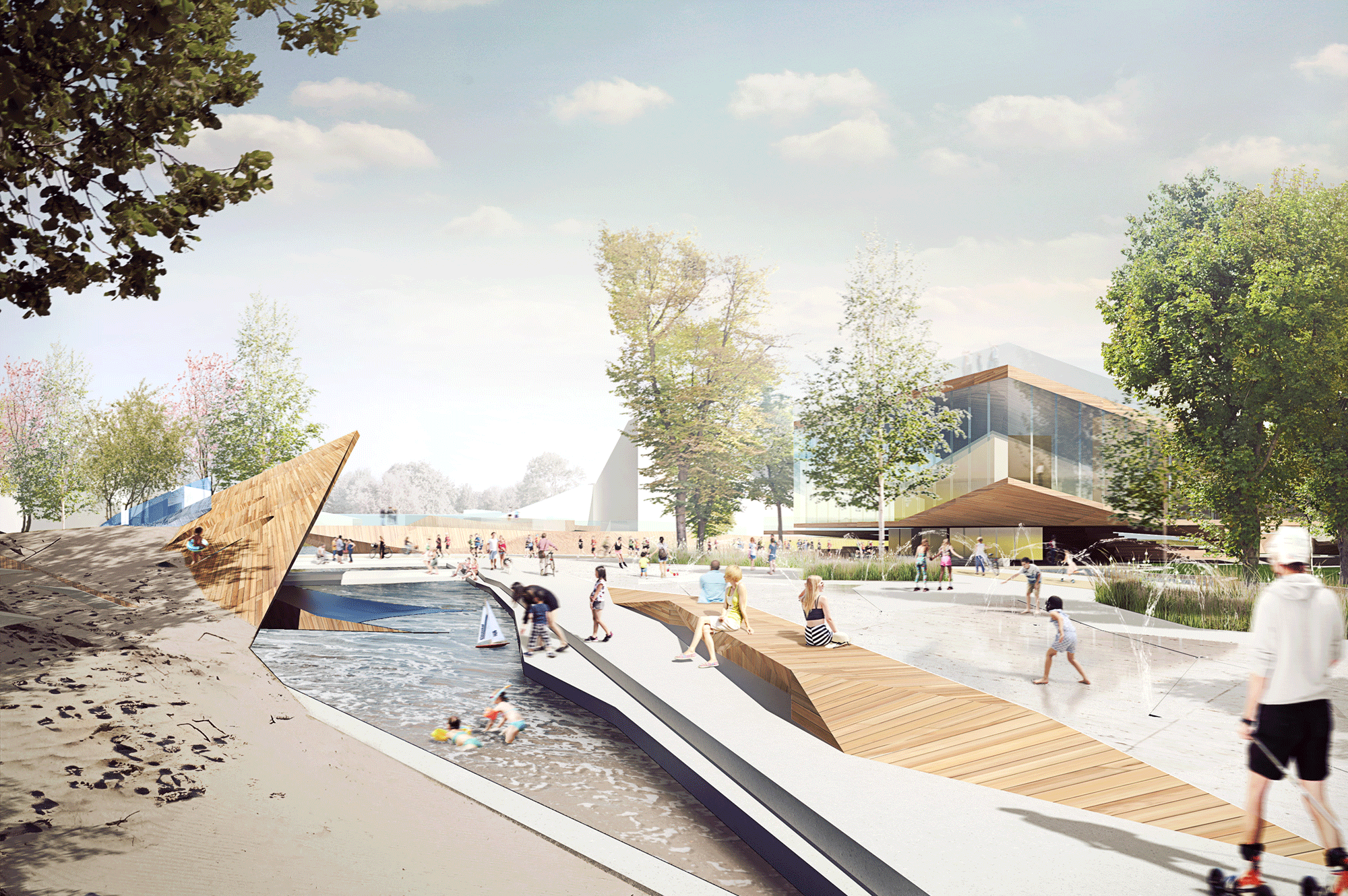 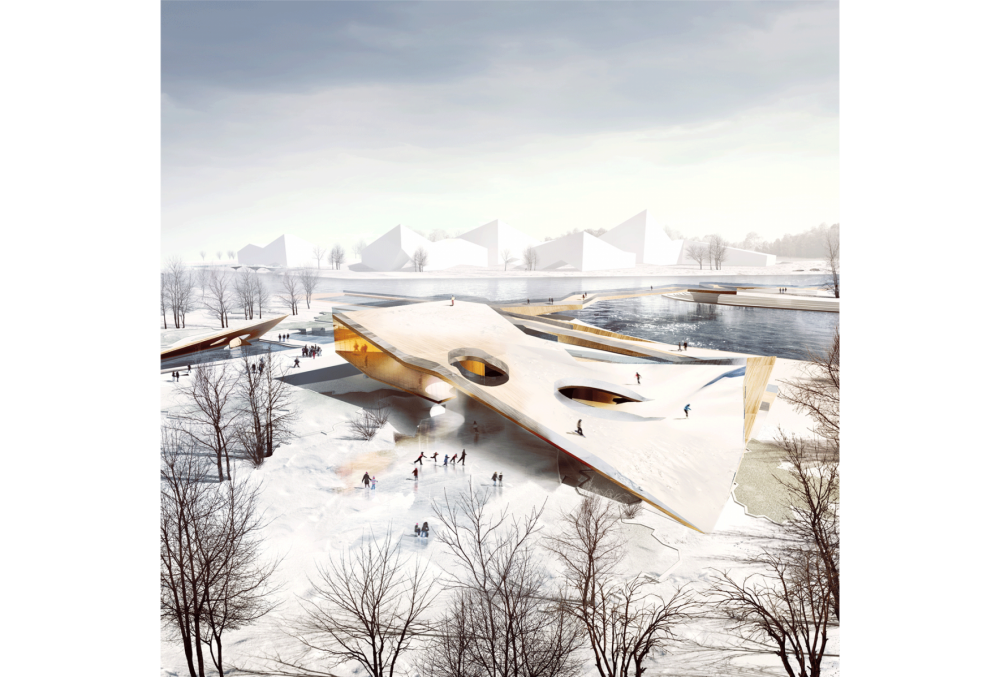 Multifunctional urban space designed for different age groups. Providing a unique experience based on the use of all the senses. High biodiversity and pro-ecological solutions. Recovering a noise-contaminated area. Solving the problem of local homelessness. Park for all seasons and for everyone. The park plans zones with leading functions are planned, including nature, sports, recreation, local activity and entrance zone. The park's communication structure is formed by a boulevard, which is run along and potentially around the canal. It is complemented by pedestrian routes running towards the canal and then, thanks to the designed footbridges, to its other side. It is filled with internal walking loops, an observation trail among trees in the southern part of the park, as well as an "adventure trail". The area of the park is accessible for disabled people and people with reduced mobility. Park with its diversity, organises and influences dynamically developing areas, intended for housing development, around it. 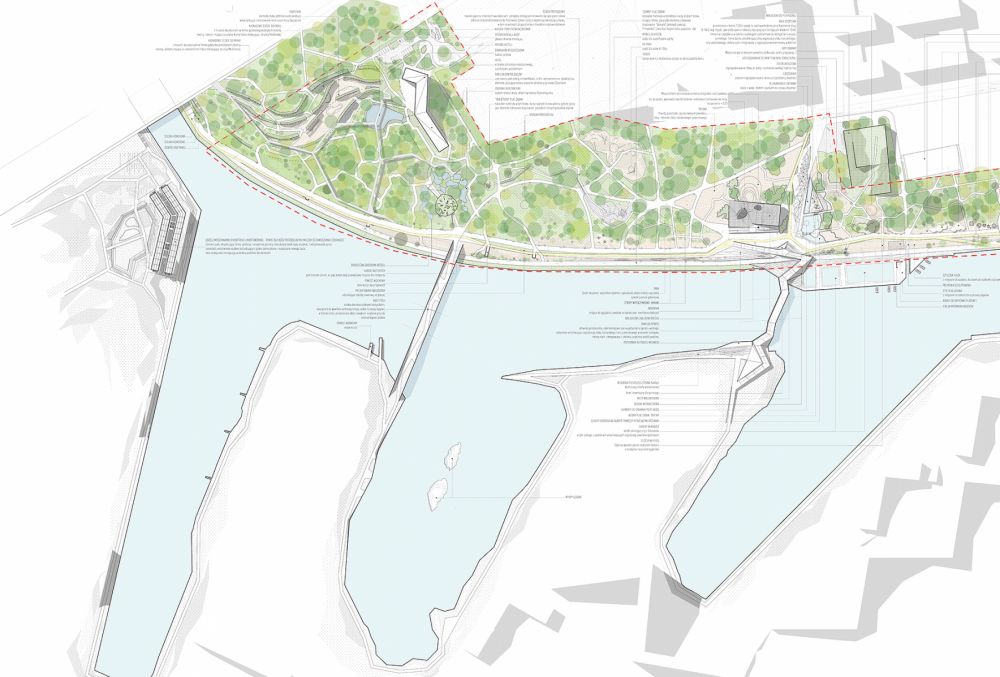 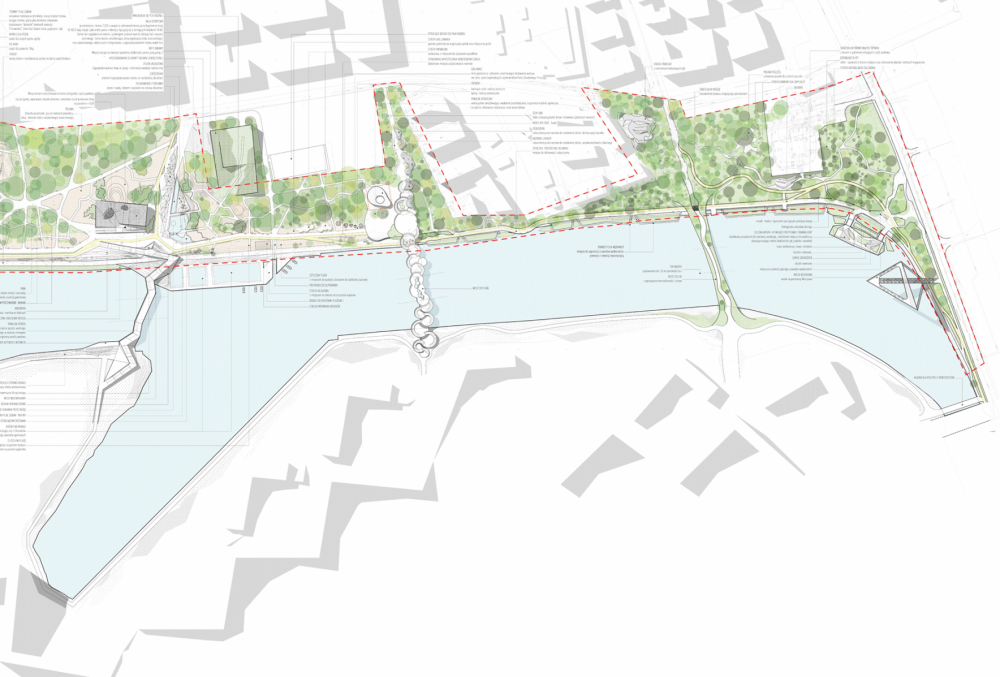 The southern natural zone, based on the existing bird breeding islands, provides for the Bird Bridge and landscape layout, modelled on the features of the alder forest. The system of picturesque water reservoirs is concentrated around a one-storey educational pavilion. In the northern zone there is a Green Bridge, an observation tower, anglers' platforms and a floating island. The Green Bridge connects both banks of the canal and is also a bio-corridor. The sports zone is the main entrance to the park. The identity of the area consists of a sports pavilion, beach, swimming pool on the canal, layout of sports fields and mini pitches and a View Bridge. The roof of the sports pavilion is to be used as a ski and toboggan run in winter and as a bicycle space for MTB bikes in summer. The Space and the Meeting Pavilion form the basis for culinary events, including joint cooking, street food events, and a weekend organic products market. The Meetings Bridge was given a form encouraging to stay on it, to meet in small groups, in different parts of it. 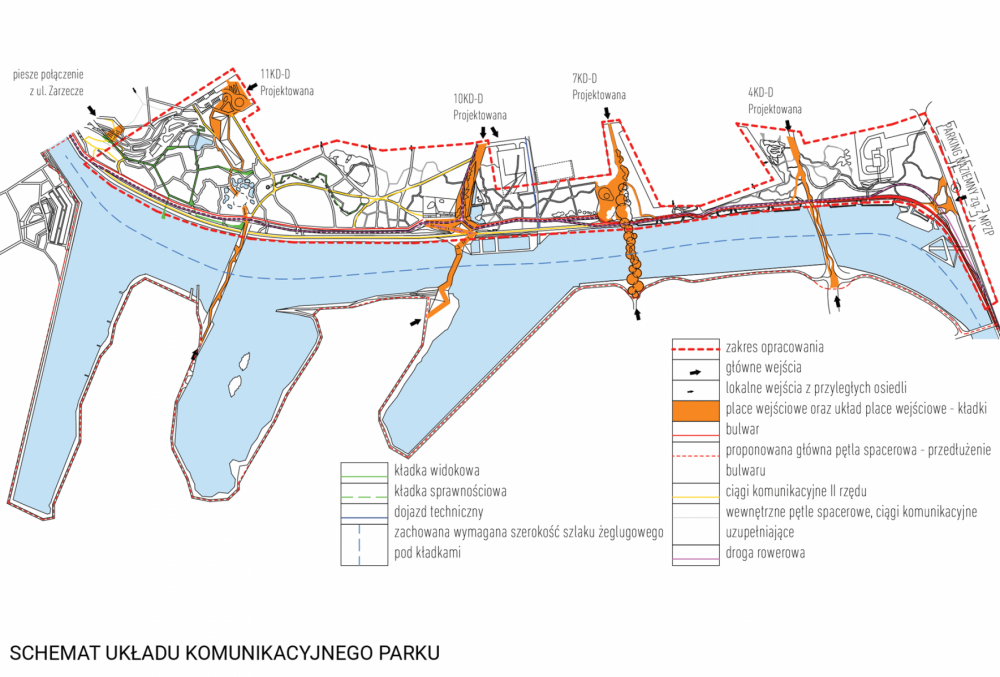 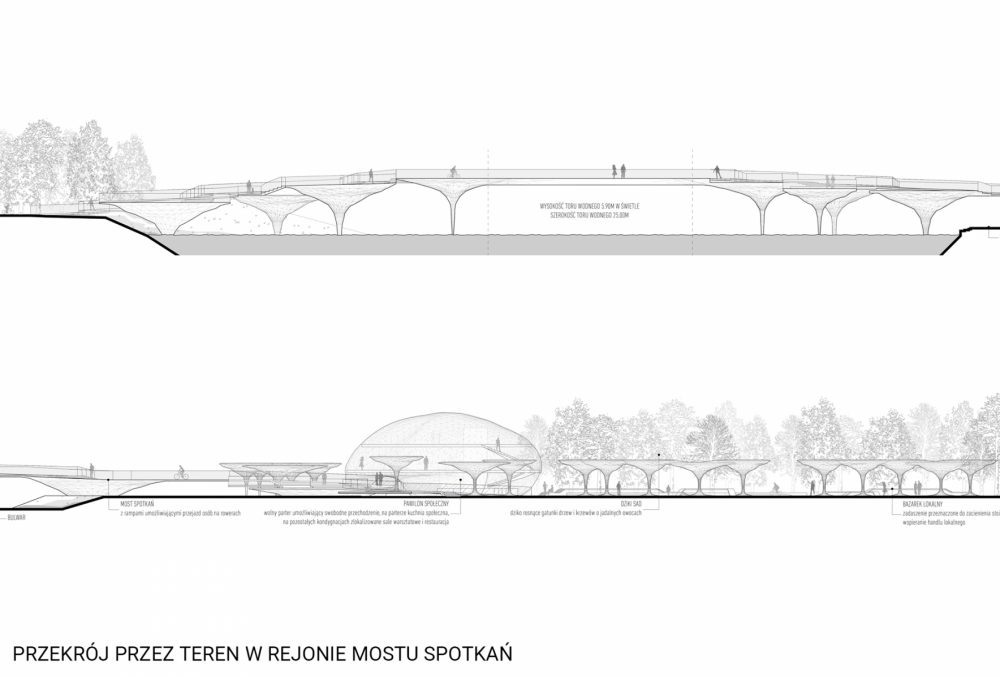 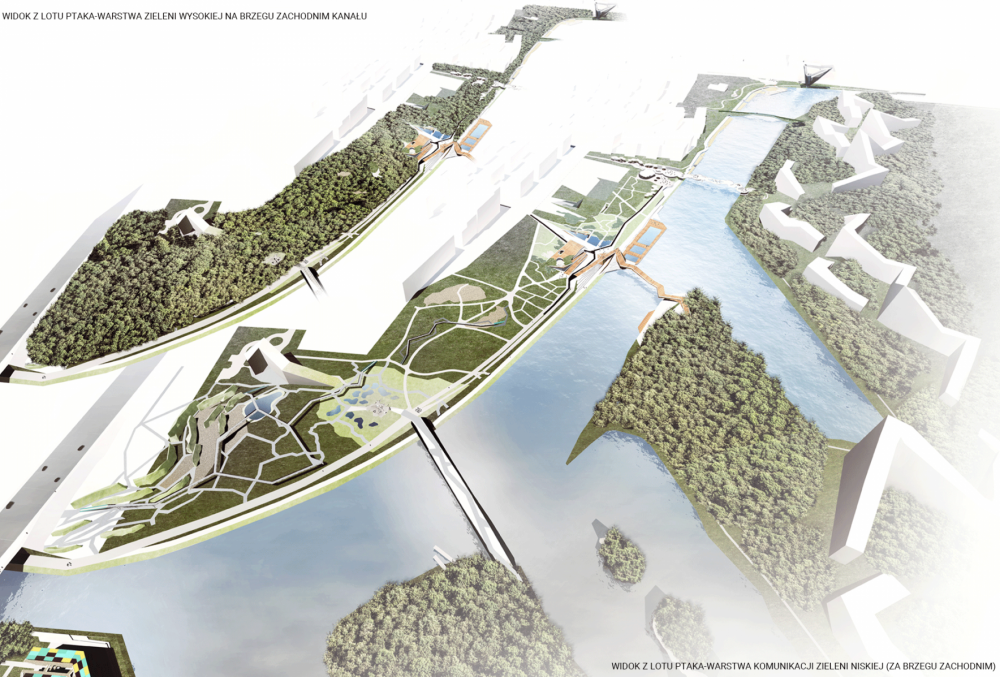 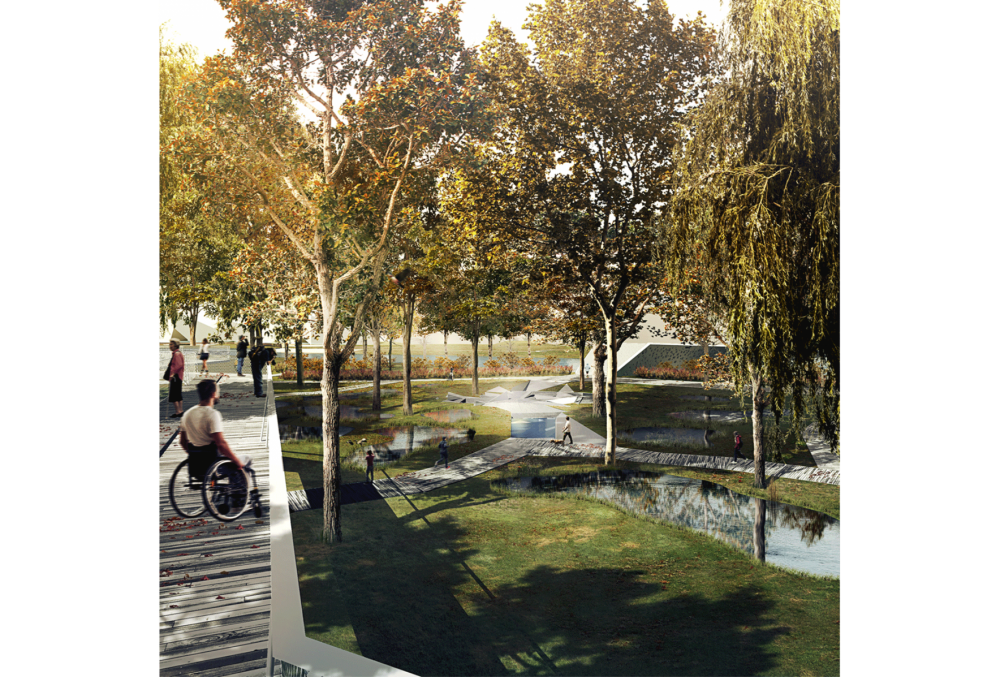 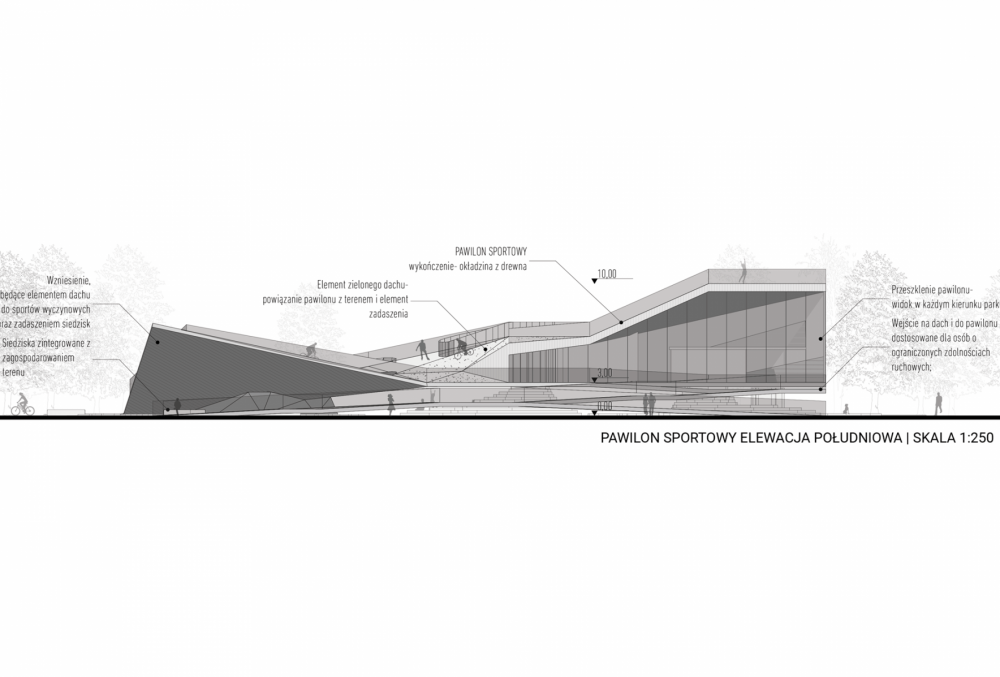 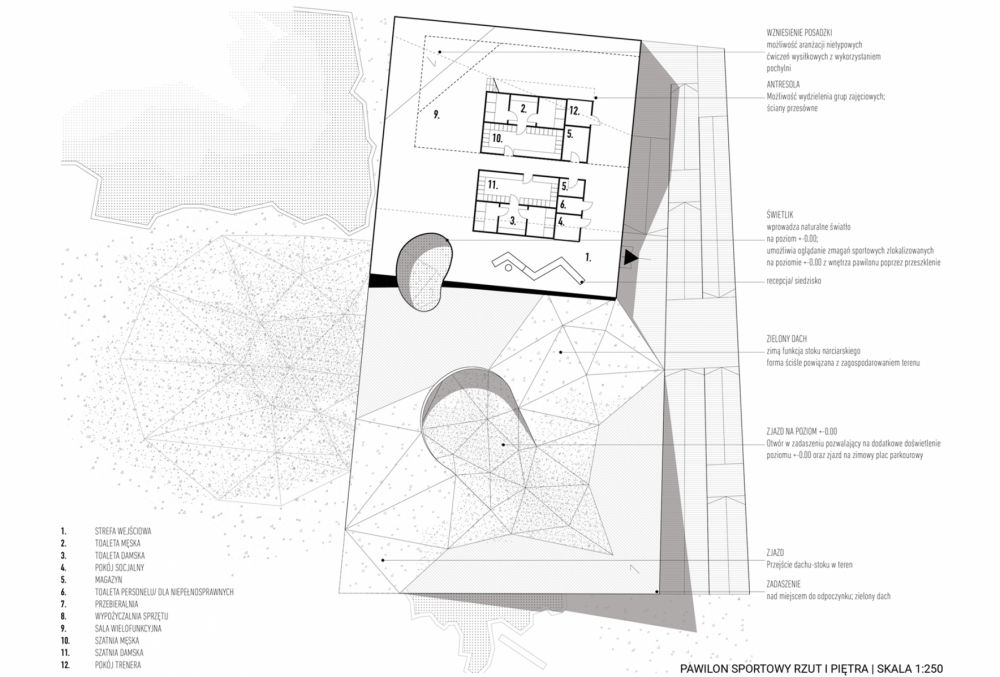 The strategic goal of the project is to improve the natural functioning of the area. Solutions supporting rainwater management, reduction of noise pollution from Modlińska Street and protection and increase of biodiversity at the level of habitats, species and gene pool of the population were proposed. For the whole park, the principle of "dark sky" was adopted, which is to avoid light pollution. In the case of greenery, the priority is the adaptation of existing trees and their gradual conversion into valuable communities. Species selection of restorations will contribute to the deepening of user interaction with the park through visual and aroma stimuli. On the western bank of the Żerań Canal, a temporary residence facility has been planned. It is to be a shelter for people affected by homelessness, currently staying in the planned Żerań Park. By joining the current maintenance of the park, residents will have a chance to return to the group of working active people and get out of homelessness.